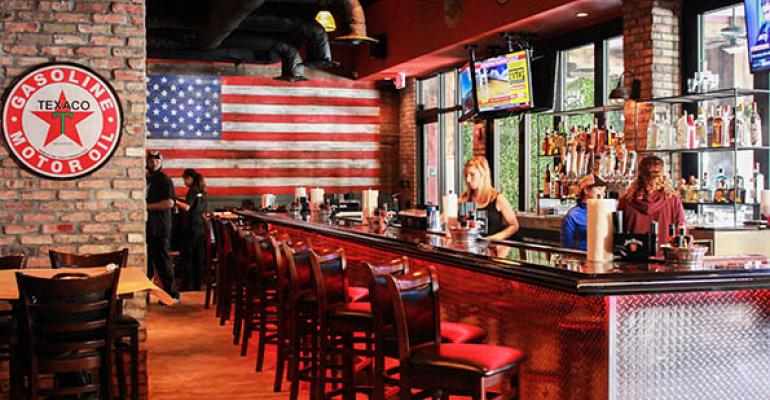 Larsen MacColl, a private-equity group based in Wayne, Pa., this week reached a deal to buy B&B Franchise Group, parent company of Burger & Beer Joint of Boca Raton, Fla., with an investment from Herman, the chain’s CEO, three years after they first tried buying the burger-focused casual-dining chain.

They have big plans. “It’s good for us,” Herman said. “We’re excited for our expansion opportunities, both in the Southeast and in other parts of the country, as well as internationally.”

Burger & Beer Joint was founded in 2009. It is a full-service chain with a bar and a rock ’n’ roll theme — its burgers are named after rock songs, such as Mustang Sally, Thunder Road, Paradise City and Hotel California. Its Ahi Tuna burger is called Turning Japanese.

The first restaurant, in South Beach, Miami, generated $5 million in its first year. This, despite being located “in an industrial area off the beaten path,” Herman said.

“Would you open a restaurant there? Probably not,” he said. “I wouldn’t have thought it would have been popular.”

The chain opened the second restaurant a year later, which also proved popular. It caught the eye of Herman, a longtime restaurateur who had been with Shula’s Restaurant Group.

Herman had known Larsen MacColl for a few years. Sensing an opportunity to take a good concept when it’s young and help it grow, they approached owner Tony Hannan with an offer to buy the concept.

“We saw value,” Herman said. “It was a very good concept that hadn’t been developed or expanded upon yet. It had a good feel, and sales were strong.”

“It’s easier to buy a small company and grow it than to buy an established company that is too big or too developed,” he added.

But Hannan turned them down. “The timing wasn’t right,” Herman said. But he did come back with an interesting offer, for Herman to run the chain as its CEO.

Herman began expanding the chain, using franchising as a primary tool — including selling B&B’s two company-owned locations. When Hannan decided to move to Colorado, he sold the chain to Larsen MacColl, although he kept a 10-percent share of the chain to benefit from its growth.

“It’s unique,” Herman said. “Not that burgers are unique. But the concept was unique, and the food is great, and it had a great following.”

The chain operates in locations of 4,500 square feet to 5,500 square feet. It has gas-station signage and a “Harley feel,” Herman said. The restaurants typically host live music acts on weekends.

And although the menu is burger-centric, it also offers items like salads and chicken sandwiches.

Its most notable attraction is “The Motherburger,” a 10-pound burger that is “the size of a manhole cover and sandwich in a bun that resembles a couch cushion,” priced at $125. It was once featured on the Travel Channel program “Man v. Food,” but is in fact aimed at groups.

“It’s a conversation piece,” Herman said. “Everyone in the kitchen comes out clanking pots and pans. It’s a pretty fun atmosphere.”

The equity injection will help the chain add 15 units over the next four years, with plans for more locations in Florida and expansions into Texas, California, Washington, D.C., and other cities.

The company has franchise deals for 22 units. It also plans to build five corporate locations over the next three to four years, all in Florida.

And the chain isn’t keeping its plans domestic. The company wants to expand internationally, with area developers.

“Now that we have an equity group involved, there’s funding there to help us grow quicker, stronger and faster,” Herman said. “There’s a lot of room for us to grow.”