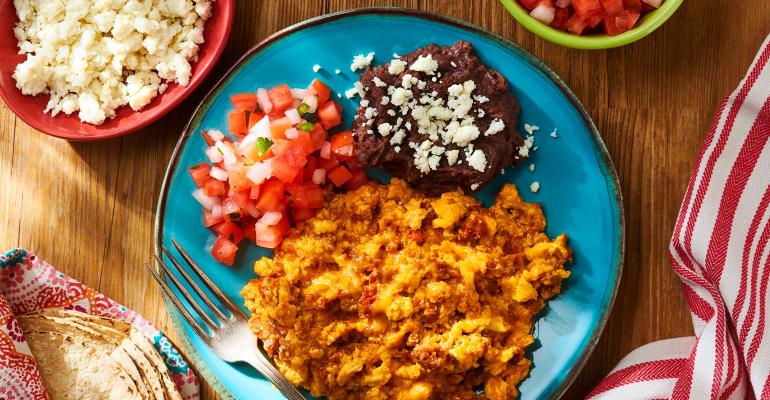 Breakfast is a big success story these days, and a growing number of restaurant operators are writing new chapters by featuring Mexican ingredients in signature a.m. dishes.

Many, in fact, are finding authentic Mexican products like chorizo, Chihuahua® cheese, queso fresco and crema have a special affinity for breakfast dishes. “I don’t know if other ethnic cuisines are custom made for the breakfast occasion, but Mexican definitely is,” says Brian Lanucha, head of insights and thought leadership at V&V Supremo Foods.

The flavors of such ingredients are unique and exciting but also approachable for American consumers, suiting them well for breakfast and brunch fare. “Chorizo and Mexican cheeses are specific examples which are very breakfast oriented — not that they cannot be used at other occasions, of course,” says Lanucha.

This is occurring against the backdrop of rising interest in the breakfast space. “It’s definitely growing,” says Lanucha. “It continues to draw attention from big foodservice manufacturers. Even McDonald’s has been offering breakfast all day.”

The growth of the Hispanic population in the U.S. and its increasing spending power and social influence is encouraging operators to feature more Mexican ingredients in their cooking. “If you don’t have Mexican items on your menu now, you’re missing an opportunity,” says Lanucha. “This isn’t something down the road. It’s happening now.”

Adds Lanucha, “If there is a Hispanic population in your immediate area and your menu is not catering to it, they are likely eating somewhere else.”

They have special appeal for millennials, those sought-after consumers eager for new, authentic and global eating experiences. In fact, more than half of millennials (51 percent) say they would like to see more global dishes menued at breakfast, including items such as chorizo and chilaquiles, according to research firm Technomic.

Lanucha notes that millennials, who now comprise the largest percentage of the Hispanic population, are increasingly influencing the tastes of their peers overall. “The younger generations are growing up increasingly multicultural,” he says.

Restaurants that showcase multicultural influences are positioned for success in the long run. “The younger generations are growing up with more diverse social influencers than any generation that we have seen before,” Lanucha says. “Living in a diverse world will be normal for them.”

Today’s consumers are sticklers for authentic, high-quality ingredients. That’s why many operators reach for chorizo, Chihuahua® cheese, queso fresco and crema, Mexican products which are unique in flavor but accessible to consumers in general.

Breakfast is just the beginning

Introducing Mexican chorizo, cheeses and crema in signature breakfast and brunch dishes may also pay off by opening the door to wider sales opportunities. “The breakfast opportunity can be a gateway to other dayparts, driving that loyalty for additional meals,” says Lanucha.