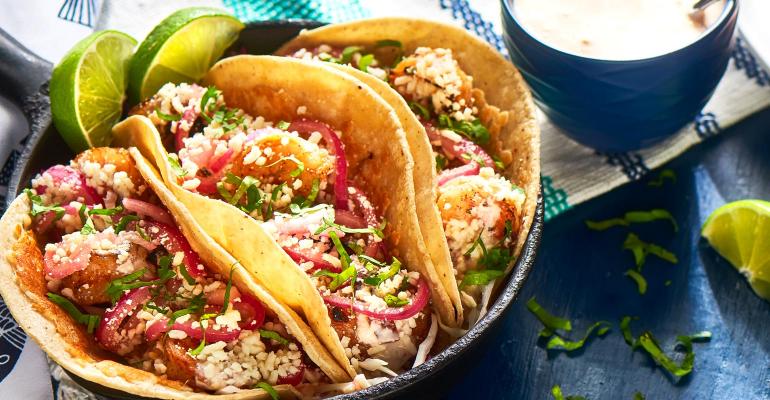 Cinco de Mayo is a fiesta of Mexican food, drink and fun. It draws customers into restaurants and keeps them coming back. And the good news is, it can be celebrated in all sorts of eateries — not just Mexican-themed operations.

However, even operators who are old hands at hosting this popular Mexican holiday may not realize its full business potential. There are ways to make the holiday even more impactful and profitable. One notable approach is to showcase authentic Mexican ingredients on Cinco de Mayo menus.

The following offers some suggestions for getting the most out of this big day.

In the United States, Cinco de Mayo — Spanish for “May fifth” — is at times confused with Mexican Independence Day. For the record, it marks the Mexican victory over France in the battle of Puebla in 1862.

Truth be told, it’s not the biggest holiday in Mexico, outside the state of Puebla. And even there it is a far cry from the rollicking Saint Patrick’s Day-style bash found north of the border. “The way Mexicans honor this history is very different from mainstream consumer behavior in America,” says Brian Lanucha, head of insights and thought leadership at V&V Supremo® Foods.

But because Americans have few preconceived notions about Cinco de Mayo, restaurant operators have a great deal of latitude to explore new flavors and promote quality Mexican ingredients in holiday specials, limited-time offers and food-and-drink pairings.

So what kind of fare is proper for a Cinco de Mayo celebration? Pretty much anything Mexican, including mass-appeal items like tacos, burritos, nachos, quesadillas, guacamole and enchiladas. But it does make a big difference if they are prepared with authentic Mexican ingredients.

There is no single Mexican dish that exemplifies this holiday like turkey does at Thanksgiving, even in Puebla. However, Pueblan specialties offer excellent opportunities for restaurants that promote traditional regional cuisine. For example, two local favorites are:

Using authentic Mexican ingredients can help to elevate a Cinco de Mayo menu. Mexican cheeses such as queso fresco, Chihuahua® quesadilla and cotija bring superior flavor and performance to many items. “You don’t have to put shredded cheddar on your taco,” says Kevin Karales, corporate chef at V&V Supremo® Foods. “You can use some cool queso fresco the way they do in Mexico. And if you're making queso fundido, it’s hard to beat Chihuahua® cheese. It melts and stretches beautifully and it’s buttery. It gives you street cred.”

Chihuahua® cheese also can make an appealing difference when served in quesadillas, which are starring on a growing number of menus. Signature quesadillas made with quality cheese and a filling such as roasted mushrooms, shellfish or pulled pork “are no-brainers” for operators to make, Karales says.

It is also a big step up in quality to switch from generic sour cream to Mexican crema, a tangy, pourable cultured cream that complements many dishes. Similarly, lean, meaty Mexican chorizo “gives a blast of flavor” to eggs, beans, potatoes, fundido and many other dishes, Karales says.

Chefs are using those ingredients to advantage in multiethnic applications, too. “I'm seeing some kind of Hispanic-influenced dish on more and more menus, even in non-Hispanic operations,” says Karales.

For example, a Cinco de Mayo combo at RA Sushi Bar Restaurant paired shrimp tacos and the Emperor Margarita. “That shows that even a sushi place is taking advantage of this,” says Lanucha.

Breakfast items also hold promise for operators looking to maximize their Cinco de Mayo opportunities during the morning daypart — and beyond. A Technomic study of limited-time offer trends in May 2017 ranked breakfast burritos and breakfast sandwiches as top-trending entrées. Many consumers also are calling for more Latin foods like burritos, chilaquiles and chorizo at breakfast, the study found.

To get more out of the holiday, operators might want to consider promoting a weeklong Cinco de Mayo menu sampler, experts say. “I think there is an opportunity for operators to win this as a season,” says Lanucha.

Invite patrons on social media for a pre-holiday drink, appetizer or cocktail on the house, especially those who have not visited in a while. “The biggest sales opportunities often come from your current customers,” says Lanucha. “It is wise to offer them more reasons to frequent your establishment.”

Finally, be aware that Cinco de Mayo falls on a Saturday this year. “That’s a night when there is a significant likelihood that people will go out,” says Lanucha. “It’s a key opportunity that operators should plan ahead for.”