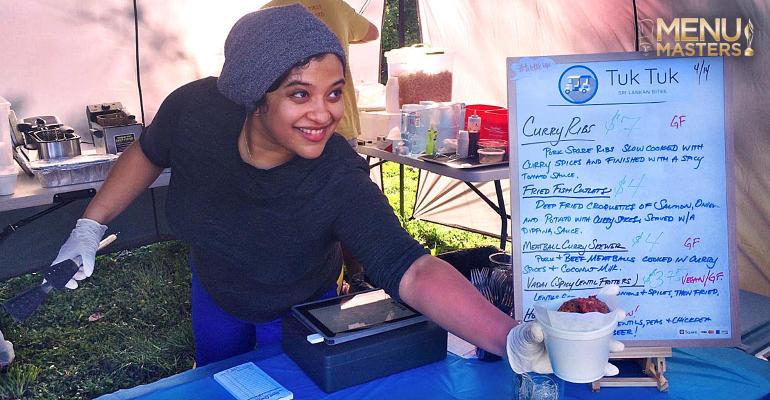 Samantha Fore: From Pop-Up to PBS

Chef Samantha Fore has been on a seriously upward trajectory since first starting her Sri Lankan pop-up business in 2016. Previously a project manager for very large ecommerce websites and having done web design for restaurants — and with no formal culinary training — she launched with Tuk Tuk Sri Lankan Bites, a pop-up business cooking her unique blend of Sri Lankan and Southern food in Lexington, Kentucky. Since that first pop-up, Fore has parlayed her unique take on flavor and food into everything from a viral front cover recipe for Food & Wine magazine to cooking all over the country and appearances on television, most recently joining the regular cast of Christopher Kimball’s Milk Street Television. And despite many pivots and pitfalls along the way, her ineffable spirit and commitment to staying true to herself, her star has just begun to rise.

Fore started with pop-ups because a food truck was too expensive for her to consider. “For something that I didn't know if it was going to work, it was a lower barrier to entry. I could set up what I wanted. I could set up with a partner. I could figure out a way to make it viable,” she said. “But you know when you start out in a 10-by-10 tent in a parking lot, you really don't expect that six years later, you're going to be on national TV cooking recipes!” She sees herself as someone who can be inspirational for others who might want to take a less traditional approach to entering the industry. Her initial investment in the tent, equipment and food was fully made back during her first pop-up event. That put her in the black as of her second event. That would not have been possible if she had attempted to purchase a food truck, or, she said, if she had gone to culinary school and entered her career with a lot of debt to pay back.

“I've just been kind of chugging along, figuring it out. I have successfully dodged a couple of brick and mortars that would not have been a good situation for me,” she said. “The thing to remember is that when you're an independent, a lot of people try to take advantage of that fact. We all know that there are folks in the industry who are not the most savory characters, and those are the folks that start to appear really early. So early on, I was getting a lot of, ‘We’ll invest in you, and we can make this a huge business, we can franchise this.’ I'm really glad that I got into the industry a little older because it allowed me to temper that with experience. I didn't go to culinary school. I went to school for marketing and business. That taught me you have to be very hawkish and very protective of your brand, your energy and your well-being.”

It also made her confident about her place in the industry. “I'm the only person who does Sri Lankan southern food in the world that I know. And that is something that I think is discouraged in a lot of more structural approaches to the culinary world. I worked in a prep kitchen cutting vegetables for $10 an hour for a long time just so I could pick up things and learn technique and learn food safety. That was a moment where I questioned my entire existence, my entire work. Because you're going from making $95 an hour to $10. Now that's a little painful. But I was not paying for culinary school, and I was essentially getting paid to learn — not much, but some.”

Fore admits that starting in the pop-up world and keeping herself nimble put her in a good position at the beginning of the pandemic. Despite losing an entire year of bookings overnight, and staring down the face of the unknown career-wise, at least she did not have a staff to support or bills to pay on a restaurant space. She leaned into her prior skillset as a project manager and immediately shifted into relief work.

“I started working in the nonprofit relief world as soon as I could. It was a moment where I found purpose because I didn't have anything that I could go back to working in the web. It was the right thing to do,” she said. “I worked with an organization that did over 2 million meals in one year. I got to do Christmas gifts for restaurant industry folks that didn't have the ability to buy stuff for their families. I got to serve family meals for people who didn't know where their next meal was coming from.”

The shift into television work was organic, and really took off during the pandemic. One of the regular chefs doing the Brown in the South dinner series, she was tapped to cook with that group at the first Chow Chow Festival in Asheville, North Carolina, in the fall of 2019. Vivian Howard’s PBS show Somewhere South was taping at that festival and at the dinner, and Fore’s screen presence was undeniable. Howard then asked Fore to spend time with her in Lexington for another episode of the show. The show began airing in March 2020, when the world was home, and Fore immediately got some attention. “All of a sudden I started to cultivate a following for people who watch PBS, and then you get asked to do the occasional video because food videos exploded during the pandemic,” she said.

Milk Street was paying attention. They started by asking her to do a couple of videos for their cooking school, then they sent a crew to tape her at home, then she quickly became a regular during the second half of their 5th season. Fore thinks that Milk Street was the best way for her to delve into television work, because of how closely they align with her personal philosophies.

“You know, they believe that the context is important, that the distinction between appreciation versus appropriation is important. They have me doing everything. My first videos were Italian, Greek, Ethiopian, Japanese and Provencal,” she said. “That my first time on national television I wasn’t forced to cook the food I look like. I told them that's important to me and I don't want to be pigeonholed into the brown chef role. I've seen what my other counterparts have gone through. I'm a cook, you know, not just a Sri Lankan cook. The culture and the cuisine and the people that I represent are vibrant. I try to carry my people, which is important because I never saw anyone who looks like me on TV. I didn't think that they would ever have a brown woman stirring this incredibly velvety Provencal chicken dish.”

Fore believes she can balance her desire to celebrate and amplify Sri Lankan cuisine with her work in her pop-ups and at residencies and festivals at the same time as her media work shows that as a Sri Lankan chef she can literally cook any global cuisine. It also shows other people who look like her that they can have any aspect of the industry open to them.

“When you cook your story and it resonates with people and you cook the flavors that speak to you and it resonates with people, it makes a huge difference,” she said. “That's what food should be about. People talk about music as a leading first language. Food and hospitality are too. You don't have to speak the same language. You don't have to cook the same cuisines to evoke the same feelings.”

Even as Fore begins to explore the full range of her opportunities, her focus remains the same as when she launched her first pop-up. “I like to share. I like to amplify. I think people are starting to realize I'm not here to be the ‘best.’ Whatever. I'm just here to be me. And I finally found something that lets me do that. It’s very freeing, to be unencumbered. Because it kind of gives you the whole world ahead.”

Her greatest lesson? Do your best to tune out the noise that doesn’t serve you, especially when it comes to the usual metrics.

“You have to decide, do you want to be effective? Or do you want to be praised? I want to be effective. I want to be efficient. I don't need the praise. The praise will come whenever; it doesn't matter to me if I know I'm doing right, if I'm making somebody happy, if I'm creating a better situation for anybody,” she said. “Ultimately the praise only goes so far. The praise doesn't let you sleep at night. The praise only makes you put more pressure upon yourself. And that's dangerous because in an industry full of people-pleasers, and an industry full of people primed to take advantage of that, needing the praise is unhealthy. To protect people and to protect their peace seems like such a radical idea, but it really shouldn't be. I'm watching people burn out, flame out, watching really talented, phenomenal cooks just walk away. And that's devastating because these are people who have phenomenal viewpoints, phenomenal recipes that we can all learn from. I want to see more of people. I want to see more people's individual stories.”

Her advice to other passionate chefs struggling to find their way? Learn.