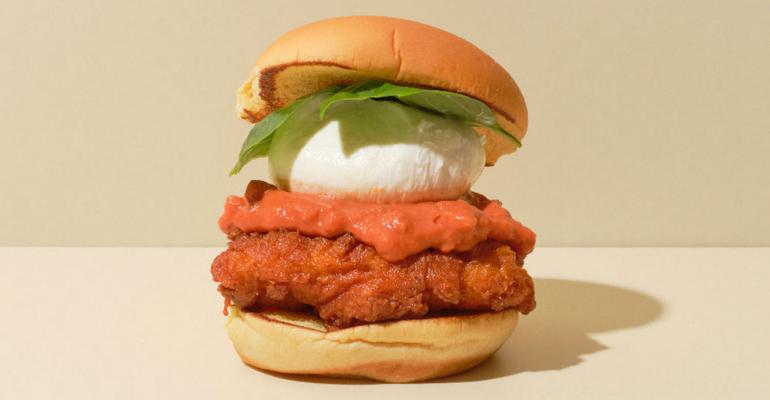 Start Slideshow ›
Plus Shake Shack’s latest test, localized crab Rangoon and a dessert that looks like a carrot

When French chocolatier Henri Le Roux made a caramel out of salted butter instead of unsalted butter in the late 1970s, it was a scandal: Such a daring deviation from classical French cooking! But obviously the experiment was a success and Western civilization learned to embrace salty-sweet flavors. That acceptance is now complete: McDonald’s has launched the Chocolate Pretzel McFlurry.

A less-established trend is the high-low one, dressing up humble ingredients with luxurious garnishes. That’s what Rusty Pelican is doing with its caviar frites in Key Biscayne, Fla.

Michael Correll is sort of doing that in a less dramatic way at Ruse in St. Michaels, Md., where he spruces of traditional Crab Rangoon with seasonal ramps and local blue crab.

Shake Shack is flexing its culinary muscles a bit with a test at one location of a chicken parm topped with burrata, and Wing it On!, a nine-unit fast-casual chain based in Raleigh, N.C., is seeking a way to mitigate its reliance on chicken wings with stuffed fried wontons that it’s calling “Dump’wings.”

And for an elaborate dessert made to look humble, Yoonjung Oh of Jungsik in New York City has made a finishing course to that restaurant’s tasting menu that looks like a carrot.