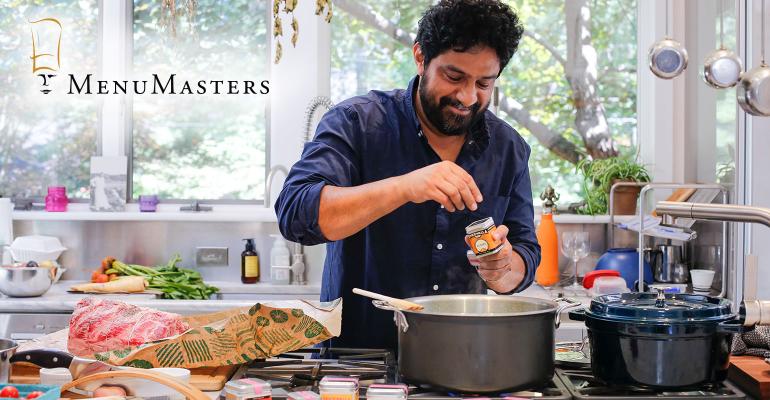 Let Meherwan Irani tell you a story: Building a brand one tale at a time

Meherwan Irani is an unlikely culinary empire builder. After a career in luxury marketing and sales, first in the auto industry and then in high-end real estate, the Indian transplant to the American South found himself at a career crossroads in 2009.

When the bottom dropped out of his industry, Irani didn’t hesitate to pivot into merging the skills he had in marketing and sales and his lifelong passion for food.

“I decided like this is my turn to make a difference,” he said. “I’m going to go ahead and take everything that I've been thinking about and learning and apply it to opening a restaurant that would be a manifestation of this vision I had of approachable Indian food.”

Feeding people was already in his blood.  Irani’s parents and grandmother ran a large private B&B in the ’70s and ’80s for Westerners who were coming to his hometown in India because there was a spiritual ashram there.  Irani had to learn how to help his mother cook Indian food that appealed and was approachable to a Western palate, without dumbing it down. He also had to learn how to cook basic Western food. The family became adept at comfort foods such as spaghetti and meatballs and casseroles, but worked at making them more interesting by adding Indian techniques and cooking.

“Initially, my inspiration to cook was personal frustration at the state of Indian food in the US when I first arrived here as a graduate student back in 1990,” Irani said. “I was already informed by this idea that you can actually make Indian food approachable and appealing to a more Western palate without dumbing it down or without losing anything in process.”

The choice to begin with Indian street food for his first Chai Pani restaurant in Asheville, N.C. came from the knowledge that it would be asking too much of himself to try to capture all of India’s cuisines under one umbrella.  Street food, by the nature of who cooks it and who it is designed to feed, pulls on all those influences, Irani said.

“Street food is the most Pan-Indian food that you can put on the plate,” he said. “It’s in the big cities and prepared and developed by migrants from the countryside who are creating the kind of food that is instantly accessible to the millions of workers that are from all different backgrounds. So, it must transcend all sort of religious boundaries, ethnic boundaries, and be approachable. I knew it would be a perfect vehicle to show India off to everybody.”

His business background serves his expanding empire as much as his cooking. Irani draws on his experiences to create a retail sensibility. He is focused on not just what’s on the plate, but on the story that he is telling, which is informing how somebody feels when they’re eating.

“You know, great retail is about telling stories,” Irani said. “People don’t buy a Mercedes and say it’s because it is more reliable than a Honda or gets better gas mileage. They buy it because of the history of the heritage, the story, and how it makes them feel to be connected and part of that.  All of that is baked into the brand. I knew I had to create a brand where India and the food, the culture, all that would be essential. Our job here is to make people feel India. Every aspect of what they see and feel, not just what's on the plate.”

This is one of the things that will strike consumers when dining at one of Irani’s restaurants. It is a completely immersive experience, and the minute someone comes through the door they are in that story he is looking to tell. There’s not a distance between it and the diner, and Irani has worked to build a team that has that complete buy-in, backed with personal experience.

“I rely on the staff to be the storytellers,” he said. “That’s why every year we send up to 12 employees, from a dishwasher to the GM, to India on these immersion trips. I always talk having cultural competence. If you're going to represent India and talk about this country and its food, you need to be culturally competent and confident in how you take the customer on this journey.”

Irani has always been visionary when it comes to innovating within his company, and his expansion has always come out of an organic place. After seeing success with Chai Pani in multiple locations, he wanted a way to expand into the grilled food traditions of India without altering existing menus that were already working so well — so Botiwalla was born.  A desire to explore the whole hog barbeque traditions and fried chicken led to a partnership with Elliot Moss and his Buxton Hall Barbecue and Buxton Chicken Place.

His need to source high-quality spices, and a desire to create relationships directly with producers began his foray into importing spices.  Other chefs he would cook with noticed the special quality of what he was working with, and it became clear there was a space in the market for what he was sourcing for his own restaurants. Spicewalla was the natural offshoot, creating success both in the commercial realm and in direct-to-consumer retail sales.

Irani’s latest venture, Nani’s Rotisserie Chicken, is a concept entirely born of the pandemic, and a perfect example of how a pivot can become a true innovation.

“During the pandemic stuck at home working and cooking, my wife Molly every week would come back from the store with a rotisserie chicken,” he said. “I had a love/hate relationship with that because it's sitting there under a heat lamp in a plastic tub and right off the bat, something about that just doesn't seem right. Surely somebody can make a beautiful, juicy, delicious bird that doesn't have to sit under a heat lamp all day long.”

Irani realized if someone could do it right, people would buy their once-a-week chicken from him instead of the grocery store. He had a lease on a small space that was originally intended for a Chai Pani expansion, sitting empty due to the pandemic. It was a light bulb moment.

“I’ve got a space,” he said. “I’ve got an idea. And most importantly, there’s a need. There are hundreds of people everyday walking into grocery stores buying rotisserie chicken because it makes sense if you are stuck at home; it’s a healthy and easy choice. How do we make it also really delicious?”

Irani’s knack for addressing gaps in the marketplace, not to mention his style being a natural for take-out, paid off during the past year and a half. Partway through the pandemic, having made simple but important alterations to menus at both Chai Pani and Botiwalla, they were doing the same numbers with take-out that they were doing before, without the added bill boosters like alcohol sales and desserts. Nani’s Rotisserie Chicken opened with food that was specifically designed to be picked up and eaten at home, which allowed the new concept to flourish when other restaurants were floundering, and there are new locations in the works.

“I think that when crisis hits, the instinct is to want to just circle the wagons, protect particular assets,” Irani said. “It’s counterintuitive to us in the restaurant business, but I think is really important to be open to opportunities to shift and grow. One thing may not work anymore and that may not be a bad thing because this other thing could be incredible, and you would never would have imagined you could do it because you were so comfortable doing what you were always doing.”

He credits this unique vision to his starting in the restaurant business in the middle of a recession.

“The minute this pandemic hit, I remember saying to myself, things will never be the same again,” he said. “We’re going to be living with a new reality. It doesn't have to be a bad reality. So, it was my job to envision that future reality as a good one, where we come back stronger and smarter, and to lean into being a part of that for my team and our customers.”