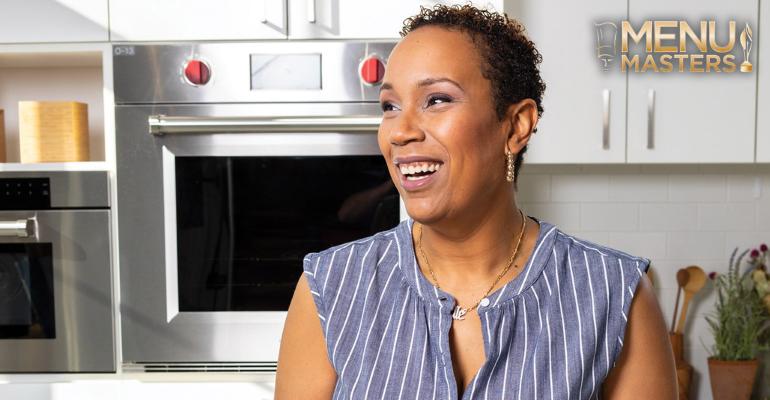 Elle Simone Scott Learned to Center Others by Putting Herself First

"Don’t ever compromise your integrity. Be true to you!"- Elle Simone Scott

Elle Simone Scott is the true definition of a culinary polymath. From her work behind the camera as a celebrated food stylist, to her on-air work for America’s Test Kitchen, to her interviewing skills on her former podcast “The Walk-In,” to her activism work as co-founder of SheChef Inc., a professional organization for women of color in the culinary industry, Scott is constantly expanding and transforming her work to include new challenges, all the while retaining her commitment as a chef to be innovating in the kitchen. Elle creates media content for America’s Test Kitchen television and social media, and works to boost their diversity efforts and promote a culture of inclusion with a specific focus on recruiting, mentorship, and retention.

With all these varied skills, it is no surprise to discover that her culinary career began in an unconventional way. “I was laid off during the recession in the early 2000s,” Scott said. She had worked part-time jobs in the hospitality industry since the age of 16 and always had her finger on the pulse of the culinary world. Despite her training as a social worker, when she lost that first job out of college, she knew exactly how to pivot.

“I always loved food and cooking,” Scott said. “I come from a family of good cooks. It was a natural inclination to pursue cooking as a transitional career because I was good at it, and most importantly, it made me happy. My first real job as a cook was on a cruise ship. That job was very demanding, and I knew that if I could sustain in that capacity that I was making the right decision.  Initially, I thought for sure I’d eventually become a restaurant chef, but after attending culinary school & interning at the Food Network, I learned about culinary media and knew that THAT would be my path.”

That was in 2010. Since then, Scott has built her career as a culinary producer, culinary production assistant, podcast host, food stylist, author, and her primary job now, executive editor and talent at America’s Test Kitchen.

It is that wide-ranging love of all aspects of the food industry that motivates her. “I love that I get to be creative and create my own path,” she said. “I have duties that are constant, like food styling and being on a TV show, but outside of that I get to pitch my ideas and am supporting in the execution of those ideas while being my whole self.”

Scott admits that it is that personal desire for authenticity that has been essential in following this path: “I don’t think I got to really show my personality or who I was in other jobs or at other companies, but I feel that it is really the most important requirement for me in the work capacity.” She credits her maturity as someone pursuing a second career with the internal fortitude to embrace these changes: “I think that was the critical part of being more seasoned when I had to make new career choices, so they were more centered around my happiness instead of money or fame or success.”

As much as Scott enjoys her work in culinary media, it is not without its complications.

“I think one of the most challenging things about my job is that it is very forward-facing,” she said. “I’m on TV so I’m being scrutinized by millions of people who have no idea who I am outside of my job. That means that there are parts of my life that feel less private than others, so I’ve been challenged with creating boundaries for ‘outliers’ and also for myself as it relates to how much real estate I allow them to take up in my mind and heart. This is an ongoing issue that actually becomes less challenging over time as I build better habits. The more visibility I have, the stronger my boundaries have become and I’m proud of that. It has actually helped me across many life genres.”

All these same lessons have carried over into her role with SheChef Inc. With her social work background as a foundation, the organization was created with a mission to provide mentoring and guidance to young women from urban settings who aspire to be exceptional within the culinary arts. The work Scott does with the organization she co-founded strives to provide an uplifting atmosphere that fosters self-confidence both personally and professionally. They provide after-school programming, assistance to parents and guardians, school counselors and students in collegiate or professional preparation programs, and support through annual culinary college tours, financial aid seminars, career focus groups and scholarships.

“I’m positioned to be of resource to many of our consumers, but I’ve learned to create a boundary around ‘giving’ of time and resource,” Scott said. “When you’re a ‘giver’ you tend to attract those who need and sometimes they will take more than they give. I believe that one has to come to that sort of relationship with the commitment and desire to invest in themselves as much if not more than I will. It’s a challenge to weed out those who are serious and want to do the work versus those who just want to be handheld. I teach our members that they are responsible for their own success and happiness; that is something that can’t ever be outsourced.”

That spirit of self-efficacy has served Scott well during the last couple of years: “The pandemic reminded me that we should not get too comfortable with the way things are in life and that the only constant is change. As an entrepreneur and organizational leader, it made me pay more close attention to people and how they express their needs and need for help. I’ve become more compassionate, I think. The pandemic also made me more deeply aware of the plethora of gaps and disparities in the culinary industry. I think people are more interested in the real stories behind culture and the ways in which ethnicities are expressed through food. I hope that curiosity and respect grow more over time.”

Scott uses that focus on the human side of the industry to challenge other leaders to center humanity at all times: “I ask them to always put themselves in the shoes of the person in front of them, if they can do that. If they can’t, then to do deeper dives into learning who they are working with and for; this helps us to do individualized assessments that can lead to making decisions that are best for people. It’s the key to employee retention. Humans are not a monolith!”

Scott’s work with SheChef and as a mentor, and her own unusual journey to her current place in the industry, means she is uniquely positioned to offer wisdom to early-career chefs who are trying to figure out their own paths. “I tell them to NOT try to avoid the pitfalls or hard lessons,” she said. “The saying goes, ‘Anything worth having is worth working and fighting for…’ so I recommend that they learn to take the good with the bad. The ‘bad’ is to show you who you are and who you are not. I would suggest that they establish boundaries early on so that they are able to recognize toxicity when they see it and have faith enough in themselves to know they deserve better and to move on and to have the courage to move, quickly.”

Scott is excited about the direction the media side of the industry is headed in, and how many opportunities are being created and pathways opened: “I always encourage folks to really explore all the layers of culinary media as there are so many roles that are exciting in their own way. I would encourage them to really look at careers that are reflective of their personality type. If you don’t like moving fast and making snap decisions, then production may not be for you, but food writing might be. I would also always recommend talking with someone who does or has done the work you’re considering and ask them to be candid about the experience.”

Her most important piece of advice to anyone, no matter what industry? “Don’t ever compromise your integrity. Be true to you!”

Scott’s new book, “Boards: Stylish Spreads for Casual Gatherings,” will be released on April 26. In the meantime, you can catch her on America’s Test Kitchen or listen to back episodes of her podcast “The Walk-In” on whatever platform you listen to podcasts.