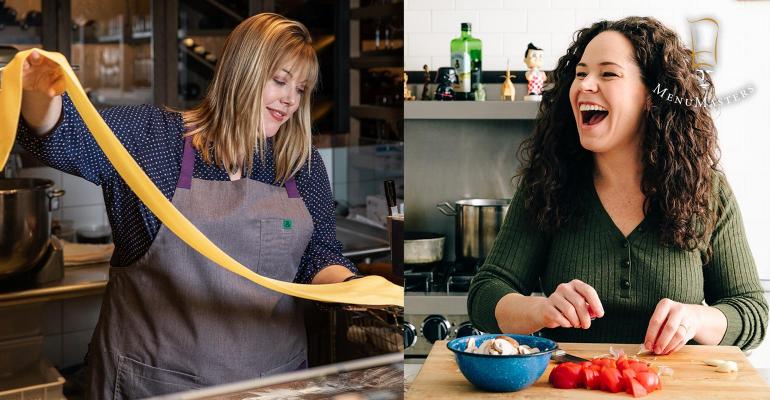 “The older I get as a chef the more I care about how I feel in a restaurant. I’m much more forgiving if food doesn't hit the mark and will go back to a place if the feeling and the service was there. It helps drive what I look for at my place and what I try to teach my team.”- Sarah Grueneberg “I think the most important people in this space are your team. Make your team happy and everybody is walking around smiling? Then your guests are just going to be happy.”- Stephanie Izard

It is unsurprising that chefs Stephanie Izard and Sara Grueneberg are friends; they have a lot in common. Both are former Top Chef competitors (Izard won her season while Grueneberg came in second on hers), both are James Beard Award winners, both came up in the Chicago fine-dining scene, and their flagship Chicago restaurants are in the same neighborhood. With Izard splitting her time between Chicago and the West coast, having recently opened her latest venture in Los Angeles, and the stress of the pandemic on the industry, they have not been able to catch up much in recent months, so we were delighted they let us sit in on their reunion.

SG: I think there are a few parallels that I’d love to kind of chat about with you. For starters, I now have my very first Chef de Cuisine at Monteverde, which is great, but a big shift for me. How do you balance your team? You know, driving the menu with what you want to cook while respecting that other leadership in the kitchen?

SI:  I initially wasn’t sure how I’d feel working with someone like that because I’ve always thought it was weird that chefs have a CDC that makes all the food. It’s a weird transition when you go into a space where the chef has given over so much control, they’re the CDC’s restaurants as opposed to the chef’s restaurants. What is strange is that once you get a little bit older you kind of pass down the torch a little bit in your restaurant out of necessity. I’m still trying to figure it out. But I love your CDC! Does she bring menu items to you? Do you guys talk about them and then she goes forward? How does that work?

SG: So, we have a rule if she’s bringing me a dish that she wants to get on the menu, she’s got to taste it on her own. It’s so important how an addition eats for the guests. Not a lot of young chefs think about whether they invested enough time in a dish. I don’t know if you would agree, but I feel like sometimes they aren’t tasting as much. It doesn’t matter how pretty it is, or if it has the coolest ingredients or techniques, it has to just eat really well for the guest or it is useless.  I know you’ve always done that line up where your whole team tastes the menus, do you still do that?

SI: Yeah, every day everybody tastes every menu item at every restaurant in the company. So, when I'm in Chicago, I'm running around trying to eat it all. I feel like I lost weight since I got to LA because I was eating like 4 meals a day at work in Chicago!

SG: She brought me a dish from the spring that I asked to shift to fall, and it’s really hard, you can’t just assume you can make small shifts and not impact the dish. In her head it was “spinach and ramps,” so let’s do “kale and tropea onions”, but it doesn't necessarily work. The kale doesn't act like spinach, tropeas are sweeter than ramps, and so how do you change that? And she said she knew she shouldn’t have brought it out, she knew it wasn’t right and she knew she needed to wait, and I think it’s those hard lessons that you learn. But those lessons are the ones that I think are the most important.

SI:  It’s always people that have like worked for me for a long time and understand what it is that I like that become the rock stars. We tried more than once to bring in an outside CDC because I thought we needed what I call a “resident old guy” someone who’s been around the block, because all of my chefs are so young and just needed some mentorship. But each time I brought in the “resident old guy,” it was a conflict. Their style is already developed and it’s their style and putting that into your restaurant, that changes it. But if it’s someone who’s come up with you, like what you have with Bailey, someone with you for so long then their style melds in with your style so much that it just works better.

SG: It just doesn’t work to go outside at that level. You're 100% right. Neither of the people we hired during the pandemic when we had sous chefs leave ended up working out long term. So, we promoted Francisco, who’s been with us since the beginning, and he was taking some classes for Business School and now he’s doing our purchasing. So, it’s really fun to see him start to learn a little bit of costing. You’re 100% right, the relationship that you build, you have to have that trust. It’s really hard to do it from the outside, and I don’t know how you’re doing it coast to coast. I mean, you couldn’t have opened a restaurant further away.

SI:  I’m not gonna, lie I’ve done some crying on my flights back from Chicago where I feel like I’ve been herding cats. It’s been tricky.

SG: I know that you have just been traveling so much. I mean, I haven’t been on a plane since February of 2020. I think working on my cookbook really took over a lot of my creative brain, but travel inspires and influences me so much, I’ve been missing it.

SI: Creatively for me I’ve been doing so many Zoom cooking classes which I love. I think my personality this comes out really well on camera or in person.

SI: It is! I want to dive more into that other side of things. I’m just giving people things they can make at home easily, you know, get into my Mom cooking brain. Make things my son Ernie wants to eat.

SI: I don’t have it all figured out yet, connecting with the staff when you’re only there for a couple of days a week and how to make it impactful time.

SG: It must have been a lot to have so many venues to deal with when the pandemic hit. How did you figure out what you needed to do?

SI: I think for us the biggest changes involved having smaller staff out of necessity. But in turn, we made our menus a little bit smaller and we just started running our kitchens a little bit smarter. I think it made us really look at each restaurant and streamline a little bit, and it's made everything just so much so much better. At Little Goat we’re no longer doing dinner, which is a change I’d wanted to do forever, and this gave us space to make that shift. I think for me it was streamlining business, streamlining our approach to everything we do in the restaurants. Really thinking about everything a little bit more. So, those are all super positives that came out of a really negative situation. I don’t know how it was with you, Sarah, but we had a lot more connecting with our staff. I think the most important people in this space are your team. Make your team happy and everybody is walking around smiling? Then your guests are just going to be happy. And I think that for most restaurants, if it wasn't apparent to them before, this last year and a half made that more notable, and I think hopefully everybody is making that pivot.

SG: Honestly, I think you’re 100% right with staff. We’ve always cared about our staff, but I think we also didn’t necessarily listen so much, and so trying to really promote an environment where people can speak out if they want to say something or vice versa has been so important, maybe more important than the ‘business.’ A lot of businesspeople would say that's crazy. But I think there’s like an emotional exhaustion that I think we have to acknowledge. Guests were really hard to handle last year, the masks and policing the protocols, I’ve never been in a situation where I felt it was on us to make decisions, with no one really helping you make the decisions, and then everyone judging your decisions. That’s been, I think, the hardest part.

SI: And we had it luckier than most. I mean, I think people know that Chicago is just such a warm and friendly and inviting city. I think having hospitality as part of your general living seems to be part of what being from the Midwest is like. I think bringing that into our restaurants for people that are visiting Chicago, people are blown away. It helps the food when we have that energy around service and hospitality. Very attentive service, in a very friendly, warm, comforting way where you just feel like you're at home, that's what the Midwest is all about.

SG: The older I get as a chef the more I care about how I feel in a restaurant. I’m much more forgiving if food doesn't hit the mark and will go back to a place if the feeling and the service was there. It helps drive what I look for at my place and what I try to teach my team. Chicago was like the Goldilocks moment for me. Coming from Houston, San Francisco was too soft, New York was too hard, Chicago was just right. The chef community is great here. It's a great place to lay down some roots. But I do find myself wanting to maybe like venture out to a few other places sometime.

SI: Come out here! Or better yet, let's all go open restaurants in an island somewhere!

SG: Absolutely, let’s do that!