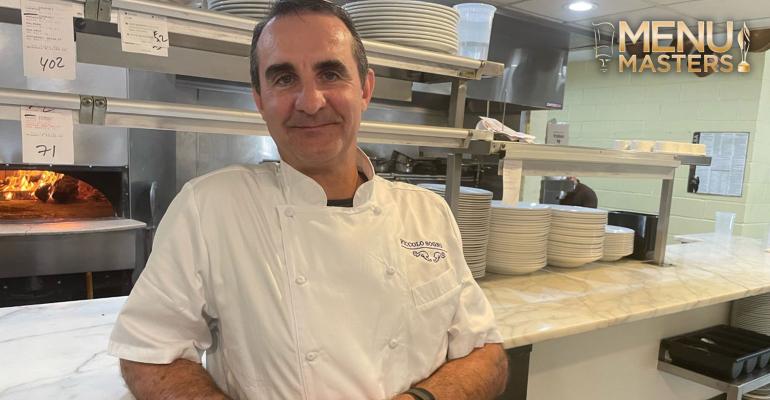 Chef Tony Priolo knows food could save the world

“If something happens, chefs are first in line, that's what our careers have come to now. We are humanitarians.”- Tony Priolo

As a kid growing up on the Northwest side of Chicago, chef Tony Priolo’s grandmother lived with them in a typical Chicago bungalow. Since they couldn't afford babysitters, she would watch Priolo and his siblings after they got home from school. She was always cooking and baking and while Priolo’s brother and sister didn't take much interest in cooking, he loved working with her in the kitchen, and credits those experiences with his love of cooking and his path to become a chef. She would take young Priolo all over the city to source ingredients, to find the best of everything at the best prices to serve her family. “Her passion became my passion and her desire to find the best ingredients without even knowing it,” he said. “Learning the basics of, finding the perfect ingredients all came from my grandmother.”

Chef and co-owner of Piccolo Sogno in Chicago, Priolo was clear from an early age that there were only two possible paths for his future. “When I was like 8 or 9 years old my aunt interviewed everybody in the family for a family tree,” he said. “She wrote everything down and it said I either wanted to be a professional chef or professional baseball player at that age. I still play baseball.”

Working in restaurants since he was fifteen years old, Priolo learned the whole business from the ground up. After washing dishes and cutting cheesecake, he moved up to chopping vegetables as a teenager, and eventually pursued a culinary degree from the Cooking and Hospitality Institute of Chicago right out of high school. There, he was better prepared than most of his classmates. “I took a French class in high school because I told everybody I wanted to go to France and learn how to cook,” he said. “I went to France because of Julia Child. I used to watch her as a kid coming home from school. Her or the Cubs.”

After decades in the kitchen, Priolo is still passionate about what he does. “I think the best parts of my day are getting here to the restaurant, getting excited to hang out with some great people who work with me,” he said. “I still get excited about that. I get excited about the seasons and the new ingredients, talking to the guests and just trying to make everybody happy.”

That doesn’t mean everything is always rosy. Despite his longevity at the helm of one of Chicago’s most beloved restaurants, he is facing the same challenges as so many in the industry. “We've been here for 13 years, we've never missed a payment to any of our vendors and now they're throwing out these exorbitant delivery charges,” Priolo said. “And I called them out. I said, ‘I've been with you through the pandemic from the beginning. I get that you're charging delivery charges, but I can't charge my customers delivery charges. I mean, hide it in the price, do something else.’ And one of my pet peeves is delivery fees on apps. You know, that's disappointing. You have food to go now, because of the pandemic. But the only one that makes money there is the delivery company. Those are challenges that you have to deal with, and you can't change the prices. I mean we're very lucky, we're busy and we finally raised our prices after holding out for so long, but we are losing money on a busy month and that's not fair.”

Most chefs might put their heads down and stay focused on their business during times like these, but most chefs are not Priolo. So when the Ukraine War broke out, he felt called to action.

“I was up really early in the morning watching it live and I just couldn't fathom what's going on,” he said. “You know, you think about everything that's going on there. And what if it happens here… As a chef, working in a restaurant, you have been taught to help other people. Anyone throwing a fundraiser, they come to chefs first. So, it's been bred into us our whole career. So now we have this thought process. If something happens, we’re first in line, that's what our careers have come to now. We are humanitarians. I wish the world could come together with food. Do you think a bird knows where the border is of Poland and Ukraine, or Russia and Ukraine? No. He flies in eats, seeds wherever he wants.”

The impulse to be of service lit a fire for Priolo that early morning the first day of the war. “I think I put 20 or 30 contacts in an email,” he said. “I just said, ‘Hey, guys. Considering what's going on here, let's do something. I'll do all the legwork. Let's have an event and raise some money. We can figure out where the money is going to go.’ And then chef Sarah Stegner jumps on board. Says she wants to be a part of this. ‘What can I do to help?’ And Chef Giuseppe Tentori, so many chefs who just said yes. Within 2 1/2 weeks from the call to action I just used every contact I had to get the Navy Pier venue, to get all the wine and spirits donate, and we just all of us used our voices to get it organized. The date they offered us was March 16. Two years to the date when we were shut down and told we can't operate our businesses. And two years later to the day, here we are helping other people.”

The event raised over $600,000 for World Central Kitchen, but despite the enormous success, Priolo wasn’t quite done. He reached out to see if he could go over and help in person. After getting the greenlight to go spend a week in Poland with WCK from both the organization and his wife, he needed to get himself and a couple other chef pals over to Poland. An angel appeared in the figure of one of his longtime customers.

If ever you need to know how a chef can make his guests feel, that one sentence says it all. But even though his heart led him to Poland to be of service, nothing prepared him for what he witnessed there. The vision of the women and children and elderly he and the team were feeding have changed him forever.

“One day you have everything,” he said. “The next day you have nothing but a bag. Your husband's gone. Just you and your kids, you know? And everyone is the same, no classes or separation. There's a couple that looks like a wealthy couple by their clothes. A little dirty because they probably traveled for three weeks to get there through trains and hiding.  They're probably in their 70s. The woman turns to her husband and just starts to cry as I'm offering her food, tearing up and you can just tell she was saying to herself, to her husband, ‘This is what we have to do now. This is our new life.’ She turns to me, puts her hands together, bows and says thank you in very broken English. I started tearing up. Certain things will stay with me forever. I don’t think any of us have ever worked harder physically. But we had to keep going for them.”

That trip codified the chefs’ message upon their return to remind the community that they need people, and they need money.

“There's no doubt they spent that money we sent in a day guaranteed,” Priolo said. “But they also need people down there to help. So that was our message. The World Central Kitchen. If you can send money, send money. And if you can show up where they are to help, wherever that is, you should go.”

If you want to support World Central Kitchen’s efforts around the globe, you can donate at WCK.org. And if you are in Chicago, you can find Tony Priolo at Piccolo Sogno.