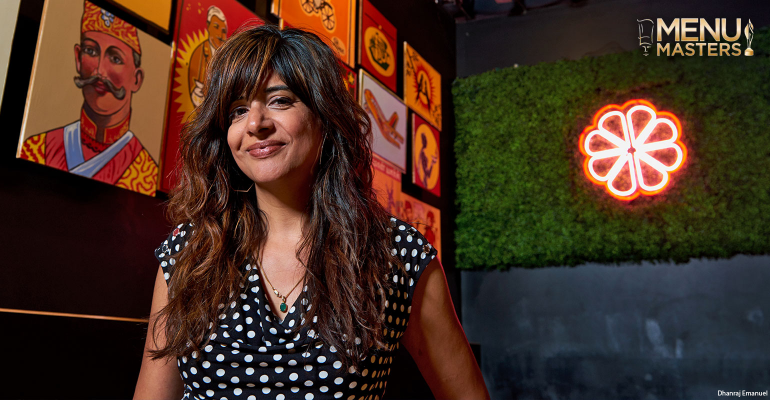 “We are having more conversations now about labor and sourcing and how to be more mindful and responsible about how businesses are operated and the actual cost and impact of our decisions.”- Cheetie Kumar

Cheetie Kumar never set out to be a chef and restaurateur. But after years as a successful touring rock musician who spent her time on the road reading cookbooks in the van and bartending when not on the road, it was time for her and her bandmate husband to imagine a different life for themselves. One with some roots. The path to her successful trio of venues in Raleigh, North Carolina, and her nomination for a 2022 James Beard Award for Best Chef Southeast was an unexpected journey, but as is so common among chefs, it was rooted in family cooking and love of food.

Born in the Punjab region of India, Kumar’s family moved to the Bronx when she was eight. While her mom had to work, a home cooked meal every night was still of enormous importance. Young Cheetie would come home from school to a prep list, so that dinner could be underway when her mother got home from work. An intuitive cook who never relied on written recipes, Kumar was able to absorb technique and family dishes by watching and helping her mom. She remembers the world that opened for her when she discovered cookbooks.

“When I first saw a cookbook, my first thought was that I can make things that my mom doesn't know how to make!” she said. “It was this big avenue of exploration that I really got into. I started reading cookbooks like they were novels, and that has become a lifelong thing. But I never thought of it as a career until a friend’s music venue closed, and we thought it would be good to open a new space in Raleigh.”

In the search for a new home for a music venue, to have a place for her band and other musicians to perform, Kumar imagined a small part of the business devoted to food.

“The restaurant opened in December of 2013. Before that, I had been traveling in a band with my husband for a little over decade,” she said. “We were touring hard, 8 months out of the year. When I was home from tour, I was bartending. But I really was always studying food. In the van, reading cookbooks, doing a little catering on the side.” But a full-scale restaurant was never her dream.

“What I really wanted was essentially a little kiosk, like a stationary food truck with a 5-item menu that I could just do sometimes. We would have it as part of the experience when a band came to town: It would be open and there would be a bar so we could actually make it into a viable business,” she said. “Well, we looked really hard for a space that would accommodate that, but nothing was available.”

Downtown Raleigh at the time was typical of many small cities where white flight left urban centers desolate after the workday was done. Years of work to rebuild the downtown, with developers revitalizing the area, meant that Kumar was in a position to take a chance on the transitional nature of the neighborhood. They tried to find a space that had the ability for her to have a really small eatery, but what they found was a three-story space that was already a music venue, with a built-out restaurant and a basement bar.

“It was mostly what we wanted, except that it's almost 11,000 square feet,” she said. “But we signed a lease and I was like, I guess I'm going to open a restaurant. So that's really how it officially started.”

Garland, Kumar’s restaurant, takes up the first floor of the building, with King’s, the music venue, on the second floor, and Neptune’s Parlor, the bar, in the basement. The synergy of the three spaces is certainly tangible when there is a band playing, with people dining and drinking before and after the shows, but Garland as an eatery has become both a regular haunt for locals and destination dining for tourists. Defining her style of cooking took Kumar some time to codify. But in many ways, her music background always informed her process.

“It took a really long time for me to not beat myself up about the fact that it wasn't neatly fitting into a category that Yelp or Facebook asked for when you start a business page,” she said. “That spun me into an existential crisis because I felt like there was a certain expectation that the food would be rooted in India and my family's recipes. And there were things I really loved, and I wanted to express and share from my personal history. But I brought that sort of indie rock thing into the mentality of it.”

The desire to use the menu to explore not only her past, but also to celebrate her current passions, was a big part of figuring out the culinary aesthetic of the restaurant. “I was really into Korean food at that point, so there were some Korean dishes on the menu,” she said. “I wanted to be able to explore the connections that people have through techniques and ingredients. I loved learning about Mexican and Latin food, I had Claudia Roden's book and her food excited me. I love how ultimately left to our own devices, people who have been colonized and must leave and move to a different part of the world always come up with a delicious way to honor their ancestors and their memories. But that’s not a great Twitter handle! So, it took several years for me to feel comfortable in the shoes that I wanted to wear.”

These inner conflicts are not new, especially in the culinary community, Kumar said. “What's expected of a brown person, what's expected of somebody who's considered ethnic and first generation and people who have immigrated to this country when they're young — how do they express themselves through food? I really wanted to have the freedom to not be boxed in by borders and put a nation's name under my category. But then that became sort of a business thing too. Realizing what it takes to tell that story, and how to present it in a way that's not confusing.” Diving into this allowed her to eventually land on a way to define her culinary point of view.

“I always start with ingredients. I always start with what's in season. I was strongly committed to source locally. And that's been the anchor,” she said. “What I do with those base ingredients is different than somebody who was trained in the French and Eurocentric techniques or traditions. I taught myself French techniques because I think it's important, but I also learned about Chinese food and tajines. So, Garland has become defined by Indian and Asian food with Southern spirit.”

In many ways, her devotion to culinary exploration without a focus on any one culture may well be a love letter to her upbringing. “The Bronx was not really a rich Indian community. It was rich in Jewish culture, Puerto Rican culture, Dominican culture. There were a lot of Irish people there still at that time, and Italian folks. I had a friend who was from Romania and another one whose family was very Greek and Korean,” she said. “And so those were the people that I learned from, people who were maintaining their culinary identity within their family and how important that was to everyone. I found a way to make friends with people who had parents that had accents and had refrigerators that had funny smells.”

It is also her musical background that helps to define Kumar’s work in the culinary sphere. She sees strong parallels in being a performing musician and being a chef/restaurateur. “They're both collaborative, and to a large extent you rely on other people being good at what their part is in order to be successful,” she said. “Knowing how to collaborate and give up control of parts of your process to others is a big part of both of those things. Any creative endeavor is going to have a process and a cycle. You get inspired by something and how you approach that shifts from wherever you are in your life. Sometimes you start with a title, sometimes you start with an ingredient, sometimes you start with a riff and sometimes you start with a sauce. All of that is very common. There's a real discipline that's involved in it, and perfecting technique and getting better at your craft.”

Kumar acknowledges that you can be great at your craft, but that does not guarantee success in the industry. The ongoing pandemic has revealed, in her opinion, the cracks in the industry that need repair, and she is hopeful that the industry as a whole can take on the responsibility of educating the consumer on the true cost of food. But that education can be painful, and often has a negative impact on business.

“I'm hopeful that Americans will start understanding the actual cost of things and not expecting luxury every minute of every day for nothing,” she said. “The math of restaurants really sucks, and there isn't that much room for anything to get any more expensive without the food on the menu becoming super expensive.” Consumers still have a disconnect between seeing their personal prices for gas and groceries rising significantly and yet expecting restaurant food to stay the same price. “The ones that don't get it are more vitriolic than ever. They're nastier than ever. And they're digging into that entitlement so hard right now.” Kumar said that her public reviews are either five star or one star, with no middle ground. And the one-star reviews are usually either a complaint about pricing or a complaint about her vaccination requirement for guests. And that is difficult to stomach for a chef who has gone down the path of paying her staff well and providing a safe work environment. It is hard to see consumers not embracing that.

Which doesn’t mean she’s note hopeful for the industry. The supply chain issues have magnified how restaurants that source products locally and have relationships with farmers and suppliers have been in a position to weather these storms better than those relying solely on commodity products.

“Relying on domestic sources, and even more than that, relying on local sources, is the right way to go in every way. The planet sense, the ecology, the economy, the stability, all of it. And we are having more conversations now about labor and sourcing and how to be more mindful and responsible about how businesses are operated and the actual cost and impact of our decisions,” she said. “I think there's going to be a permanent change in a lot of that those aspects. I'm hopeful because I think there's no surviving this without us addressing the very big elephants in the room, and that will ultimately improve the industry as a whole.”