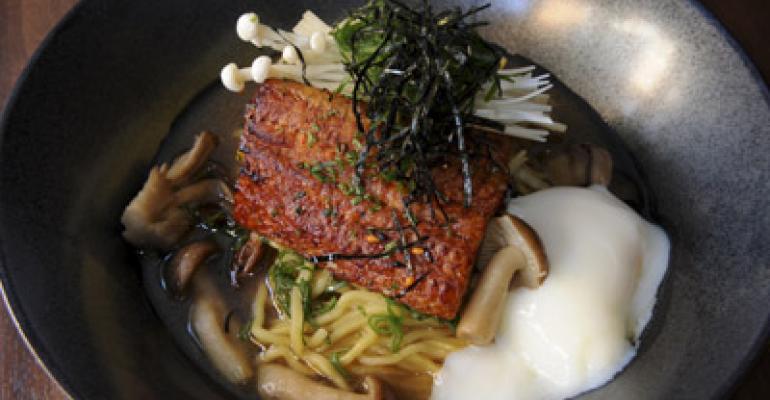 Umami, the so-called “fifth flavor,” is how our taste buds detect protein, that is, certain free-floating compounds associated with protein. One of those compounds, free glutamate, is found in abundance in foods such as mushrooms, oily fish, miso, seaweed and Parmesan cheese, as well as cooked meat.

Chris Gould, the chef at this sashimi bar attached to Ken Oringer’s fine-dining restaurant Clio, uses those ingredients in this dish.

He starts with chicken stock, which he simmers with pig feet to give it a thick, viscous texture, as well as an umami boost. The he adds mushroom scraps left over from Oringer’s other restaurants — from morels to trumpets to shiitakes — along with Parmesan cheese rinds. He strains the stock and adds some miso and caramelized onion to it.

He cooks ramen noodles in the broth and tops them with barbecued unagi, or freshwater eel. He garnishes the dish with grated ginger, daikon, scallion, roasted maitake mushrooms, shredded nori, Szechuan chile paste, fried garlic, and a “two-hour egg,” cooked in an immersion circulator set at 62.5 degrees Celsius — the temperature between where egg yolk and egg white coagulates — resulting in a cooked white and liquid yolk.