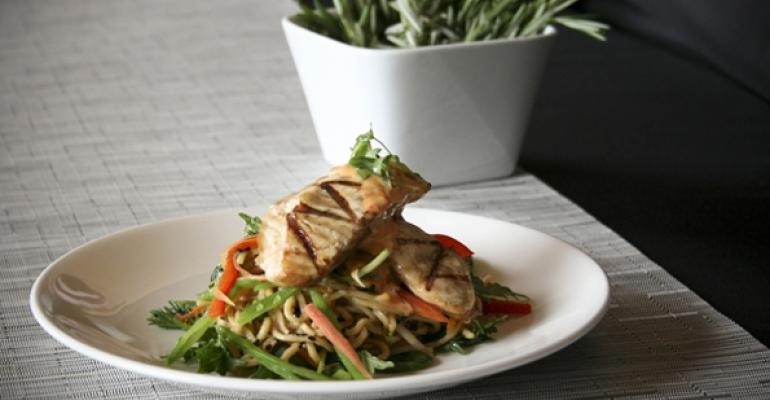 Sustainability can benefit the environment, the menu and the bottom line

As the sustainable food movement continues to grow, it’s spreading from the farm to the sea. And though it takes some effort to become educated about what to serve and what to avoid, many chefs and operators are finding that serving sustainable seafood can actually be less expensive, more flavorful and allow for more creativity in the kitchen.

According to the National Restaurant Association’s What’s Hot in 2012 chef survey, sustainable seafood is a top trend among chefs. And sustainability initiatives, such as the well-known Monterey Bay Aquarium Seafood Watch program, report an increase in the number of chefs and operators following their guidelines.

“Chefs themselves are starting to see the writing on the wall,” said Sheila Bowman, Seafood Watch manager of culinary and strategic initiatives. “It’s not just a nicety; chefs are seeing they won’t be able to get this fish 10 years from now.”

All the seafood Chef Jeffrey Jake serves at Silverado Resort and Spa in Napa, Calif., comes from sustainable, local sources. Since 2001, Jake has been involved with Monterey Bay Aquarium to understand and encourage seafood sustainability.

Though some chefs might find this limiting, Jake says there are plenty of good options on the Seafood Watch list to choose from. For example, his menu currently features Monterey Bay abalone (or sea snails), with sweet Nantes carrot puree, fava beans, sea lettuce and truffle vinaigrette.

“The challenge is small compared to the efforts and costs to the fisherman,” said Jake. “I guess the biggest challenge is to get the public not to always eat from the top of the food chain. Try sardines; eat more shellfish.”

To keep the menu sustainable at Ripple in Washington, D.C., Chef Logan Cox serves all manners of lesser-known and oft-shunned species, including blue fish, wahoo, anchovies and sardines. “These fishes are generally tastier,” said Cox. “They are much more unique, special. We try to focus on that. It requires us to be that much more creative.”

Aaron Noveshen, owner of Pacific Catch, which has four locations in California, gets around higher costs of more popular fish, such as salmon, by offering sustainable varieties in season, as well as buying them in larger quantities. He also features lesser-known fish that are harder to differentiate from overfished varieties, such as albacore tuna in place of yellow fin tuna.

“It’s no silver bullet,” said Noveshen. “A lot comes down to seasonality.” He also notes the importance of developing a good relationship with seafood suppliers who understand what sustainability means to your brand.

Celebrity chef Sam Choy has been serving sustainable seafood in his restaurants for two decades, and now he’s doing the same with Pineapple Express, his new Los Angeles-based food truck. For example, Choy only uses sustainable salmon for his poke, wraps and salads. Though it can sometimes cost more, Choy says it’s worth it.

“Customers are happier; the planet stays healthier,” said Choy. “I can tell you I have never lost a customer because we used sustainable fish, but we have certainly gained many.”

A leader in the sustainability movement, Bon Appetit Management Company rolled out Seafood Watch’s guidelines nationwide back in 2002. The company, which continues the effort in its 400 locations in 32 U.S. states, doesn’t see cost as a barrier.

“Contrary to popular belief, serving sustainable seafood can be less expensive,” said Helene York, director of purchasing strategy for Bon Appetit. “Some environmentally responsible species can be more expensive, which is why menu planners should look at their fish program as a whole. If planned properly, there shouldn’t be an increase.”