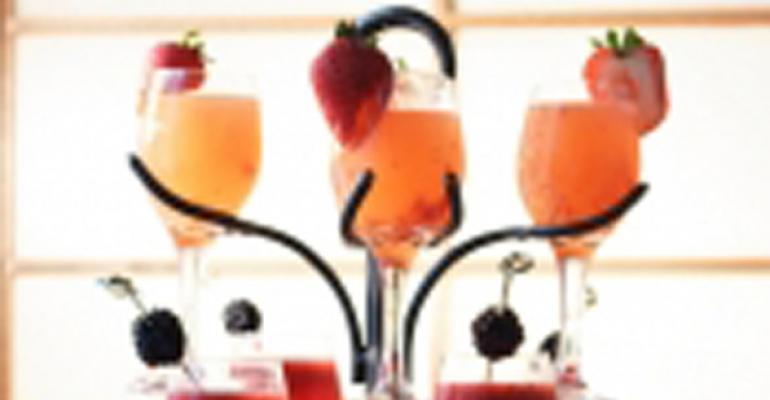 With Peru rising in prominence as a global culinary influence, the SushiSamba restaurants are launching new signature cocktails based on pisco, the unique and heady grape brandy of that South American land.

The Chilcano, Chicha Morada Sour and Peruvian Thyme are three of the cocktails slated to debut on a new menu this spring along with new Japanese- and Brazilian-inspired drinks. They are the next destinations in a journey of discovery for customers who have embraced the Pisco Sour, the popular and tangy Peruvian libation of pisco, lime and egg white that SushiSamba has long promoted.

“Pisco has depth of flavor as well as umami characteristics,” said Drew Peterson, corporate beverage director of SushiSamba, which has five restaurants and is based in New York City. “It is a very interesting spirit that deserves to be better known.”

Although in Peru a Chilcano may be as simple as pisco mixed with ginger ale, the SushiSamba version dials up the formula with muddled fresh ginger, ginger beer and house-made ginger syrup.

“Pisco has a strong flavor that stands up to the added spiciness,” Peterson said.

Another new creation is the Chicha Morada Sour, based on chicha morada, an age-old nonalcoholic Peruvian drink made from blue corn and spices “mulled into a purple, fragrant, tasty liquid,” Peterson said.

It is made into a cocktail with pisco, chicha morada mixture, sugar, egg white, lime, smoked orange peel and orange bitters and is served in a snifter.

Peruvian Thyme, another newcomer, combines pisco, muddled fresh blueberries and thyme syrup. It is shaken and served in a Martini glass garnished with a sprig of fresh thyme.

“The aromatics of the cocktail are very enjoyable and there are also some surprising blueberry flavors,” Peterson said.

Patrons will be able to explore new cocktails like these in SushiSamba’s Cocktail Tree, a custom-made metal stand with branches that hold four samples each of three different signature drinks. The samples are four ounces each. It serves three to four people and is priced at $70.

“People can share them along with a selection of aperitivos at the table,” said Peterson. “It’s a great way begin dinner with friends and get the party started.”

All of this comes at a time when chefs and foodies are agog with Peru. The New York City-based restaurant consulting firm Baum + Whiteman touted Peruvian as “the next cuisine” in their dining predictions for this year. Moreover, Peruvian trailed only ethnic fusion cooking in the ranking of trendiest ethnic cuisines in the National Restaurant Association’s What’s Hot in 2012 Report.

Peterson pointed out that his company has been way ahead of that trend. SushiSamba has been introducing patrons to Peruvian culture, along with Brazilian and Japanese, the other pillars of the concept, since its first restaurant opened in 1999.

“Of course, if you want to order a vodka Martini, we have that for you,” Peterson said. “But if you put yourself in our hands we will show you how the spirits and cuisines of three different cultures pair together.”