/sites/all/themes/penton_subtheme_nrn/images/logos/footer.png
Recent
Recent
Luby's agrees to sell cafeterias to Calvin Gin affiliate
Jun 21, 2021
Raising Cane’s finds focus leads to sales, unit growth in 2020
Jun 21, 2021
Viewpoint: Questions restaurant operators should ask themselves to move forward into a post-pandemic world
Jun 18, 2021
Here’s what operators should know after this first round of the Restaurant Revitalization Fund
Jun 18, 2021
Luby's agrees to sell Fuddruckers to Black Titan Franchise Systems
Jun 18, 2021
Featured
Here’s how restaurants are using creative condiments and sauces to elevate dishes
Jun 03, 2021
9 restaurant companies are tackling diversity, equity and inclusion in the C-suite
May 27, 2021
4 things to know about Chipotle this week
May 20, 2021
Burger King to debut new chicken sandwich nationwide on June 3
May 19, 2021 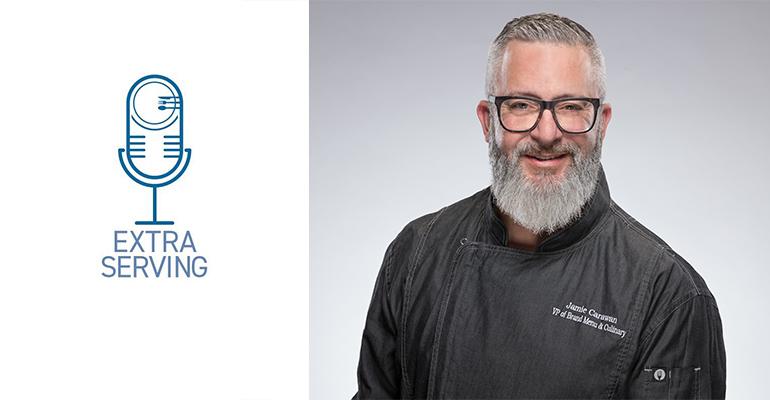 On this week’s Extra serving podcast, Jamie Carawan, vice president of menu and culinary at casual-dining chain Buffalo Wild Wings, discusses how he is working to refocus the offerings at The Inspire Brands subsidiary’s than 1,200 restaurants.

Carawan, who joined Buffalo Wild Wings last June, has been charged with repositioning the restaurant as the “Great American Sports Bar.” That means launching a new burger, which the chain did in March, as well as improving core items such as their wings.

Related: Buffalo Wild Wings to craft beer fans: You can ‘geek out’ at our bars

It also means focusing on bar food, such as nachos, which they also launched in March, and taking more of the food production in-house to make it more distinctive an also taste better, and creating items that will be competitive with independent tap rooms.

Additionally, Carawan, who spent a decade working at chains such as Twin Peaks and On the Border, has removed some of the more mundane items, like wraps, and is continuing Buffalo Wild Wings’ drive to offer more local craft beers that vary by location.