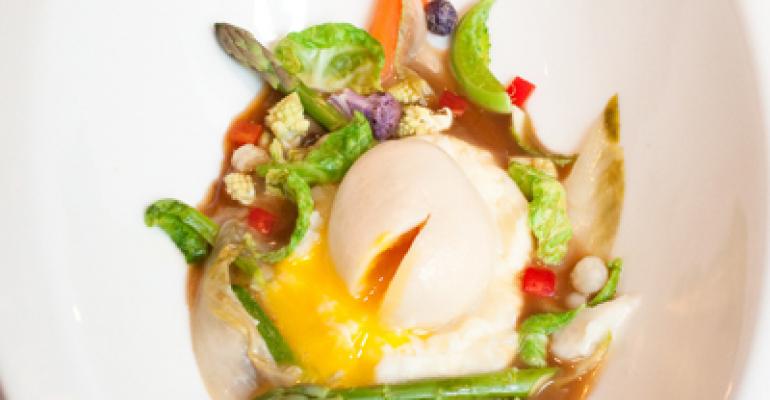 Not your average egg

What looks like a soft-boiled egg white actually is a sunchoke purée in this dish by chef Jesús Núñez.

The idea came to Núñez when he was making cauliflower blini. He found that the cauliflower’s flavor was lost when he added flour and eggs. So instead he added methylcellulose, a type of gelatin that hardens when heated rather than cooled.

“When I saw this white purée it reminded me of cooked egg whites,” he said.
These days he’s using sunchoke instead of cauliflower, which he boils in milk and then adds 3-percent methylcellulose.

Núñez cuts off part of a raw eggshell and hollows it out, separating the white from the yolk.

Using a squeeze bottle, he applies a layer of the sunchoke purée to most of the inside of the shell. Then he places the egg yolk in the center and closes the “egg” with more purée.

He cooks the egg in a Combi oven for a few minutes, peels it and serves it on a bed of seasonal vegetables.

Watch a video of Núñez making the "egg."