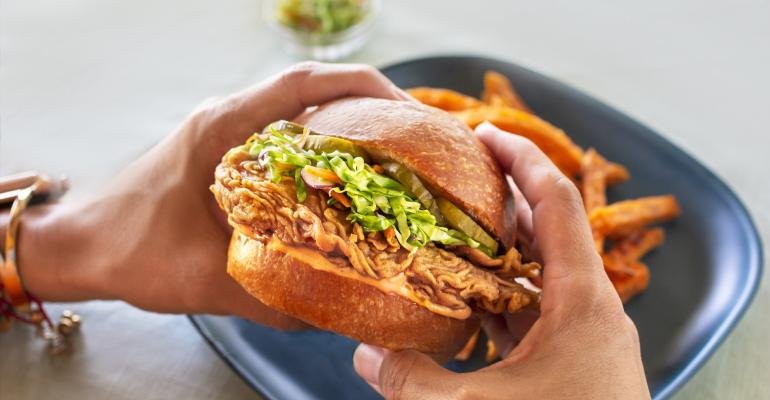 Move over, Beyond and Impossible: cell-cultivated meat is the next big protein alternative

When Upside Foods’ cell-cultivated chicken gained FDA approval in November, it was a huge step for the so-called “lab-grown meat” industry: So, what’s next?

Ever since Memphis Meats (now Upside Foods) was founded in 2015, the food technology world has been curious, skeptical, and waiting with bated breath for the first consumer launch of cultivated meat. Also known as lab-created and cell-cultured meat, cultivated meat (the industry-preferred term) is a form of cellular agriculture that allows for the growth of animal tissue from cells invitro. In the future, cultivated meat — which would not involve animal husbandry or slaughter — could be a humane and eco-friendly solution to a growing global hunger crisis.

Though perfecting the science and taste/texture of the products — as well as keeping the cost down — has been a slow-going process, Upside Foods hit a milestone in November, after becoming the first cultivated meat company to be granted FDA approval for its chicken product, following a lengthy public review process. Now, Upside Foods will have to gain similar approval from the USDA (likely this year) before it can begin commercial production and distribution of the product.

“The reality is that more consumers know what cultivated meat is today than they did a year ago or the year before that,” Amy Chen, COO of Upside Foods told Nation’s Restaurant News. “The promise of cultivated meat is that you can have the meat that you love without having to raise and slaughter animals en masse, and without the risk of foodborne illnesses found in traditional meat. If you tell your consumers about a delicious, safe, high-quality product that’s better for the environment, who wouldn’t be interested in that?”

Also last year, Upside Foods raised a $400 million round of series C funding, the bulk of which went toward the creation of a commercial-scale facility and perfection of the supply chain. Right now, the company only has a pilot-scale facility which opened in 2021 in the San Francisco Bay area. Upside Foods has also caught the eye of big names in the food and retail industry, including Whole Foods — which is an investor in the company — and chef Dominique Crenn, who will be their initial culinary partner and will introduce the product to the restaurant world.

“We expect 2023 will be the year that consumers in the United States will first put cultivated meat into their mouths,” Chen said. “We want to start putting tastebuds where people have been hearing and dreaming about this for a long time.”

Upside Foods is not the only company working on perfecting cultivated meat products: they’re just the first to cross the FDA finish line, which opens the gates to a host of other competitors out there like SuperMeat, an Israeli b2b cultivated poultry company that has been perfecting chicken products created from avian stem cells, with plans to launch their products to market in the U.S. by the end of 2024.

SuperMeat brings to the table a platform with the ability to produce multiple tissues and cells, including fat tissues and connective tissues that help to make the cell-cultivated chicken resemble traditional meat even more, with a variety of textures and tastes.

The science is roughly similar at both companies. Osnat Shostak compared the process of growing animal cells to the way you might grow yeast when fermenting beer, though the process can be definitely trickier and less stable.

“Choosing the right stem cells, stabilizing them, and being able to build this cell bank that you will use for perpetual usage is a challenging part of the process,” Shostak said. “You want the process to be efficient, short and reach the yields you need [to keep making the product].”

The complexity of making cell-cultivated meat will keep the price at a premium for a while, until the process is perfected over time. This has been a criticism of the new meat industry: that it can’t really ever replace or even supplement the traditional meat industry because it costs too much to produce and the supply chain is not yet consistent.

“Like any new industry, it will take a while to come down in price, just like when electric cars were first introduced,” Shostak said. “Economics of scale will definitely help bring down the cost […] and another way of overcoming this challenge is by introducing hybrid products that are mixed with plant-based meats.”

Of course, there are other segments within the industry outside of man-made poultry. Cultivated seafood is another rapidly growing segment of this burgeoning chapter of food science. Cultivated seafood companies are particularly interested in remedying the environmental repercussions of overfishing and climate change. San Diego-based cellular aquaculture company BlueNalu, for example, has spent five years perfecting the cultivation of seafood like bluefin tuna — an endangered species that the U.N. has tried and failed to place on a protected list of marine wildlife.

Lou Cooperhouse, founder and CEO of BlueNalu believes that in creating rare and expensive cuts of seafood like the toro cut of Pacific bluefin tuna (or what he calls the “wagyu of the sea”), chefs will be especially interested in working with them to get their hands on seafood that is otherwise difficult or irresponsible to purchase.

“We’ve talked to sushi operators and asked them, ‘what are your pain points?’ and bluefin tuna was consistently the number one answer because you just can’t get it,” Cooperhouse said. “We’re working directly with chefs to create that optimal bluefin tuna Toro experience with the right texture, color and mouthfeel.”

In Oct. 2022, BlueNalu announced the first blueprint plans for a large-scale facility, utilizing technologies that can significantly cut down on production costs like a single cell suspension, allowing cells to multiply within specific parameters at a swift pace.

In five years’ time, BlueNalu’s factory will be up and running in San Diego and creating and selling products like the toro bluefin tuna, among other fin fish and crustaceans. Of course, they do have to get federal approval first, but unlike their colleagues in the meat cultivation industry, only from the FDA, which oversees seafood production.

“We can actually launch and say our products are microplastic-free, no [formerly live] animal components, no extraneous ingredients, non-GMO,” Cooperhouse said.

Another cultivated seafood company at the helm of the budding industry is Bluu Seafood, a German company focused mainly on creating Atlantic salmon and rainbow trout and blended processed products like fish fingers, and fish balls, and fish nuggets, since they’re easier to create than whole-muscle fish. If all goes well, they expect to have products in initial restaurants by the end of 2024. Bluu Seafood will shortly announce the company’s first round of series funding of $7.5 million, which will help fund the pilot production plant and grow their product portfolio with industrial production capabilities up and running by 2025.

Each of the companies we spoke to mentioned the challenges of keeping both production costs and consumer prices down.

“In the beginning it will be marketed as a novelty item at relatively high prices,” Hans-Georg Höllerer, vice president of business development at Bluu Seafood said. “[…] But we are confident it will be at price parity within 3-5 years and could actually be cheaper than conventional seafood one day because seafood prices are exploding.”

With concerns about overfishing and greenhouse gas emissions from animal agriculture (the cause of 15% of all greenhouse gas emissions globally), traditional seafood and meat cultivation has a major impact on the world around us. While plant-based alternative proteins were the first wave of potential solutions for this global food crisis, science is making cultivated meat an alternative (and possibly more appealing) reality. According to McKinsey and Company, by 2040, cultivated meat could compromise nearly one-third of all meat production worldwide.

“I think there's always going to be a place for conventional meats, like the turkey centerpiece at Thanksgiving,” Amy Chen said. “[…] But a good swath of the world is going to embrace cultivated meat, not only because of the taste and product experience, but also because it allows them to feel like they’re making a positive impact on the world.”