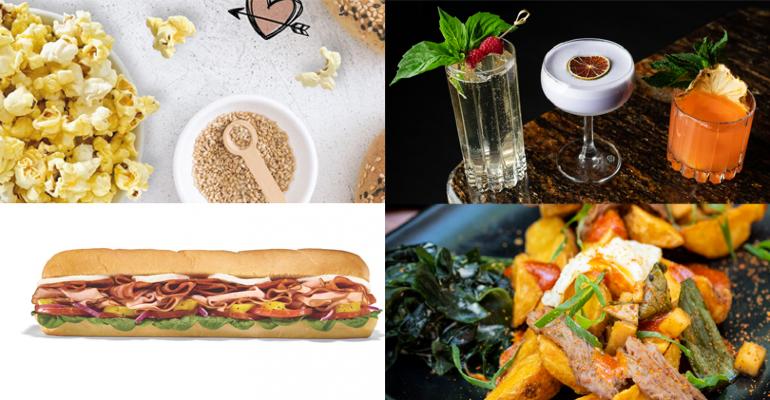 The Everything bagel, which was invented around 1980, had a fine and relatively quiet existence until the past few years, when the combination of granulated garlic and onion, poppy seeds, sesame seeds and salt began appearing as a flavoring in other foods, on the rims of cocktail glasses, in the spice section of supermarkets and elsewhere. Now, as you’ll see, it’s on popcorn.

Nashville hot chicken had a similarly quite presence, existing only in Nashville and only at a couple of out-of-the restaurants, until the whole country decided that dipping fried chicken in spicy oil was a good idea. Its latest iteration is on an eggs Benedict dish in New Orleans.

Loaded fries get the culinary mashup treatment in Houston, where they might commonly be topped with chili, but at Hawker Street Food Bar are topped with bulgogi.

Meatless Mondays, a movement in which people would refrain from eating meat on the first day of the work week, never really caught on, but meatless options are now a way of life, and an increasingly popular one, so Sweetfin, a poke concept, recently introduced a line of vegan side dishes, including one with spicy black rice noodles.

Subway, the world’s largest chain in terms of number of units, has spent the past year or so refreshing its menu, and it is exhibiting many of its new meats and one of its new bread options in new Italian-inspired hero, the Mozza Meat Sub.

And finally, for Women’s History Month, the high-end Asian fusion concept Tao is offering a line of cocktails named for inspiring Asian women.