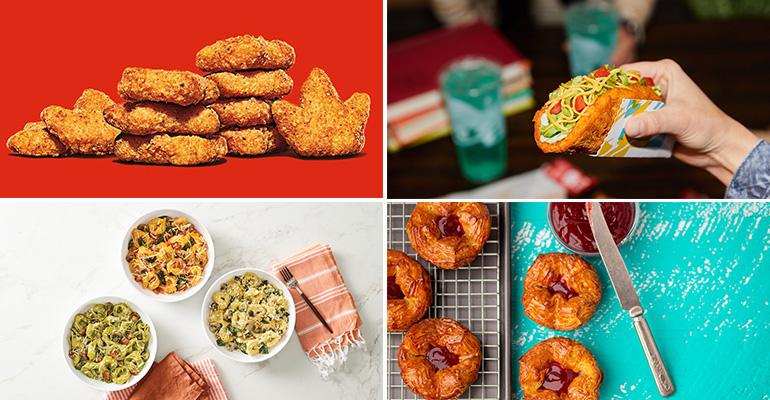 The big news is that Noodles & Company is finally rolling out the stuffed pasta that it has been testing since last year, but the big chains are looking to their past.

Burger King is testing crown-shaped chicken nuggets, which it removed from its menu in 2011, in select restaurants in Miami with plans to re-roll them out systemwide at some point down the road. Don’t worry if you don’t like pointy nuggets; the standard-shaped ones will remain.

Taco Bell, meanwhile, is bring back its Naked Chicken Chalupa, first introduced in 2017, for which the tortilla is replaced by fried chicken, and Papa John’s is augmenting the Papadias that it introduced last year with the option of having Parmesan cheese crusted on them.

Sweetgreen is introducing a curated salad that reflects tennis pro Naomi Osaka’s typical order at the chain, and if you order it on Wednesday, May 26, 100% of sales will support organizations that help improve food access to communities of Asian Americans and Pacific Islanders.

Atlanta Bread has a bunch of seasonal watermelon dishes, while Perkins Restaurant & Bakery is celebrating strawberries and Krispy Kreme is celebrating the fact that we might all be able to travel again someday with a line of island-themed doughnuts.

On the Border has new cocktails, bowls and queso, with the promise of more to come, The Coffee Bean & Tea Leaf has a new mocha Ice Blended drink, Fuzzy’s Taco Shop is putting spiced chimichurri on a taco and the Weekly Taco Feature at Velvet Taco is actually a Japanese-influenced lettuce wrap.