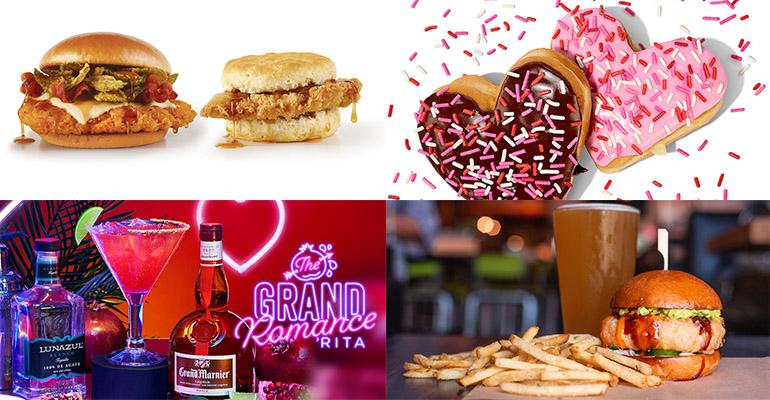 Many pizza chains, and some others, are going to be offering heart-shaped pizzas over the next couple of weeks. We’re not giving each of them its own slide, but we’re mentioning it here in case you don’t remember it from past Valentine’s Days. They’re generally priced around the same as round pizzas.

Elsewhere on the theme of love being in the air, Chili’s Grill & Bar has a Valentine’s Day themed Margarita of the month, Dunkin’ has heart-shaped doughnuts and a pink Refresher, and Yogurtland’s flavor of the month is chocolate-covered strawberry.

Studio Movie Grill, for its part, is celebrating the release of the Ruben Fleischer film Uncharted.

The big news is Wendy’s new hot honey chicken items, available indefinitely, but Baja Fresh, for its part, has chicken flautas, Norms has a bunch of birria dishes and Pollo Tropical is letting guests put sliced avocado on whatever they like, for a price.

Hopdoddy has a tempura tuna burger.

Taziki’s Mediterranean Cafe is bringing back shrimp kebabs for a couple of months, but Huddle House has made its Southwestern and homestyle burritos and bowls, introduced last year as limited-time offers, permanent items.

Taco John’s has taken its chicken tenders out of their shell and now is selling them in bulk and Torchy’s Tacos is letting guests have burritos in bowls now.

Toppers Pizza has some new cheesy pizzas and Velvet Taco’s Weekly Taco Feature is the increasingly popular combination of chicken, bacon and ranch.