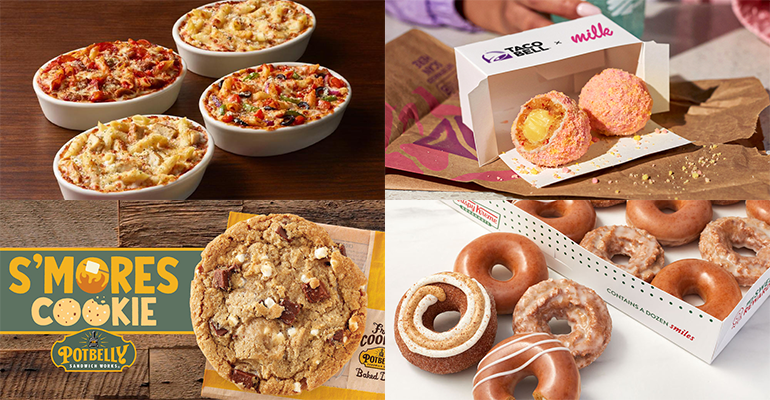 Taco Bell made a splash recently with the announcement of the return of its Mexican Pizza, which was really a reannouncement since they announced it the first time in April, but there were supply chain issues etc., and now it’s back.

But since we already reported on that, instead we’re looking at the giant chain’s collab with little chain Milk Bar that involves a strawberry cake ball and pieces Taco Bell’s crunchy taco shell.

Don’t let the weather or your calendars confuse you: It’s pumpkin spice season again, at least according to Red Robin and Krispy Kreme, which are rolling out seasonal delights. Krispy Kreme’s items are out a full month earlier than last year and include two new items: Pumpkin Spice Latte Swirl Doughnut and Pumpkin Spice Iced Coffee.

August is apparently National S’mores Month, which Potbelly is celebrating by a chocolate-graham cracker-marshmallow cookie, but various other chains, including The Buffalo Spot, Dolly Llama, Mooyah and Red Robin, are celebrating the heat with milkshakes, and Bruster’s Real Ice Cream is allowing guests to blend any sorbet, sherbet or ice with Sprite for a drink called a Freeze.

Pressed, meanwhile, has a new frozen dessert made of passion fruit, and Yogurtland has a new sorbet made with Sour Patch Kids flavoring

Einstein Bros. Bagels has a new breakfast burrito and The Great Steak has a steak-and-eggs sandwich.

Hopdoddy has a back-to-school burger topped with fried bologna, and Hurricane Grill & Wings is now serving an odd sort of nachos topped with wings.

I Heart Mac & Cheese and Pollo Campero both have new chicken sandwiches, Little Caesars has a pepperoni pizza with extra pepperoni and Pizza Hut has revamped its pasta line.

Tender Greens has a bunch of new globally inspired bowls and whatnot, and Velvet Taco’s Weekly Taco Feature is named after Acapulco.