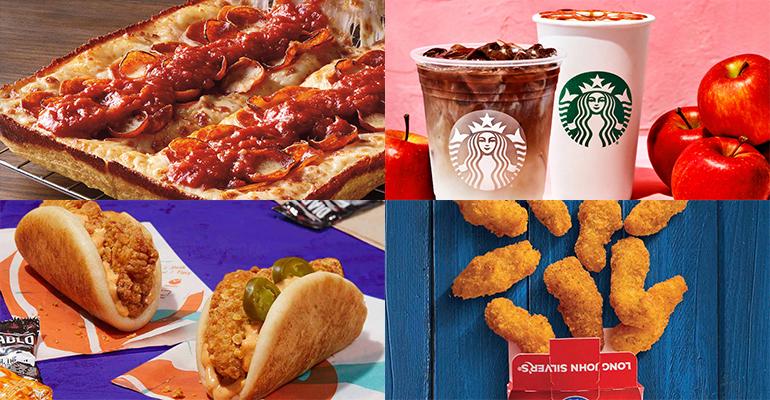 Stop the presses: Starbucks is bringing back its Pumpkin Spice Latte!

Just kidding. Although Starbucks is obviously bringing back its game-changing seasonal beverage, for the 18th year in a row now, that’s not press-stopping news. However it does have a new Apple Crisp Macchiato, which is kind of interesting.

In other big chain news, Pizza Hut is bringing back the Detroit-style pizza it introduced as a limited-time offer earlier this year, and Wendy’s is rolling out a burger with a new cheddar bun.

Cheesy carriers are becoming increasingly prevalent these days, such as at Del Taco, where quesadillas are being used as taco shells now.

Donatos, for its part, has a new grilled cheese pizza.

Although we’re not out of August yet, more chains are already introducing pumpkin spice items, including The Coffee Bean & Tea Leaf, First Watch, Huckleberry’s Breakfast and Lunch, Smoothie King and SweetFrog. Hungry Howie’s is, too, but it’s waiting until Sept. 1.

Freddy’s Frozen Custard and Steakburgers is bringing back a burger first introduced in 2018, and Mooyah Burgers, Fries and Shakes has a brand new Texas-inspired burger and a Texas pecan shake to go with it.

Huddle House has new bowls and wraps, Long John Silver’s has lobster bites, Bluestone Lane has a flat white with oat milk and Jinya Ramen Bar has a new soup with a side of fried chicken.