/sites/all/themes/penton_subtheme_nrn/images/logos/footer.png
Recent
Recent
5 food and beverage innovations at the restaurant show
May 25, 2022
NRN editors discuss single-seat cars, lessons learned during the pandemic, industry resiliency during Day 3 of the National Restaurant Association Show
May 24, 2022
Sustainability takes the spotlight at the 2022 restaurant show
May 24, 2022
Eight interesting foods at the National Restaurant Show that were not plant-based protein
May 24, 2022
T2D Concepts develops revolutionary franchise model in Roots Chicken Shak
May 24, 2022
Featured
Tech Tracker: Toast launches POS solution for quick-service restaurants
May 17, 2022
Meet 4 emerging NYC concepts
May 16, 2022
Memphis Seoul brings Korean BBQ and Southern cooking to Brooklyn
May 11, 2022
Executives on the move: 13 restaurant leaders with new positions in April
May 03, 2022
Menu Tracker
brought to you by
Menu 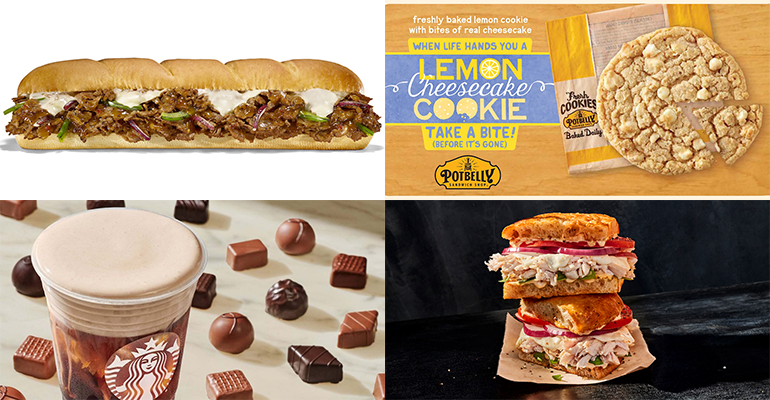 In late March, Panera removed its Frontega Chicken Sandwich from its menu and the sandwich’s fans, to say the least, were not pleased. So its back, permanently this time.

Starbucks also has a new permanent addition to the menu: Chocolate Cream Cold Brew, which is cold brew coffee topped with a cold chocolate foam.

And Subway, as part of its ongoing “Eat Fresh Refresh” initiative, has improved its teriyaki sauce, and in celebration it has introduced a steak sandwich with the sauce on it.

Caribou Coffee, for its part, is introducing a vegan breakfast sandwich, and this week we’re also hearing from Meta Burger, a three-unit vegan chain in Colorado, which has new menu items.

Speaking of small chain’s we don’t hear from often, Eegee’s, which has around 30 locations in Arizona, serves wraps now, Happy Joe’s Pizza & Ice Cream, based in Bettendorf, Iowa, with 42 locations, is expanding on its Taco Joe pizza during what it’s calling Mexi-Fest, and Toasted Yolk Café, an 18-unit chain based in Houston, has some French toast specials.

Potbelly has a new cookie, Pokeworks has pressed sushi, and Firebirds Wood Fired Grill has a line of new cocktails.

This gallery has been corrected to reflect the fact that Starbucks' Chocolate Cream Cold Brew is a permanent addition to the menu, and to clarify that Eegee's wraps are priced the same as 8-inch subs and that wraps will only be available through July.
Start Slideshow ›
TAGS: Fast Casual Quick Service Casual Dining
0 comments
Hide comments
Related
Sponsored