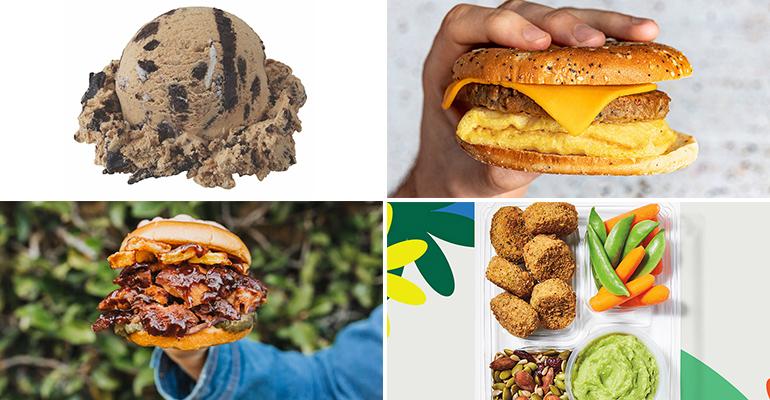 Happy oat milk week. While that’s not an official thing, maybe it should be as the popular dairy alternative is now available at Starbucks locations across the country, and new oat milk options also are available at Dutch Bros Coffee, Peet’s Coffee, PJ’s Coffee and Yogurtland. It’s the frozen yogurt chain’s first oat milk offering.

In other firsts, Bareburger is testing what might be the first use by a restaurant chain of a plant-based seafood substitute with two griddled not-tuna burgers at two locations.

Buffalo Wild Wings has a new wing sauce flavored with white truffles, which might seem like a first, but various casual dining chains, and some quick-service ones, have offered truffled items in the past. On the other hand, it might well be the first wing sauce with truffles at a chain.

Mooyah Burgers, Fries and Shakes is making an upscale move with its new burger, dressed with herbes de Provence and lavender syrup, and Sonic Drive-In’s new burger has the fancy touch of mesquite butter.

O’Charley’s has some new seafood items for Lent, and Rapid Fired Pizza is pushing a meatless pizza for Lent called the Roasted Margherita. Margherita pizzas usually have tomato sauce, but this one has white sauce, and in a similar vein, Philly’s Best, which prides itself on its authenticity, is nonetheless offering a bacon ranch chicken “cheesesteak.”

Insomnia Cookies and TooJay’s Deli are getting a jump on St. Patrick’s Day with special items, and Bartaco is continuing its five-week celebration of Margaritas — this week with one made with pomegranate.

Chuck E. Cheese is celebrating the approach of spring with a bunch of colorful sweets.

El Pollo Loco has a new line of portable lunch boxes, Jinya Ramen Bar has introduced Tsukemen — a type of ramen in which broth and noodles are served separately — and Rōti has jumped on the riced cauliflower bandwagon with a new bowl.

Tacodeli, meanwhile, is offering carne asada tacos, and Sonny’s BBQ has a sandwich made with baby back ribs, off the bone, of course.