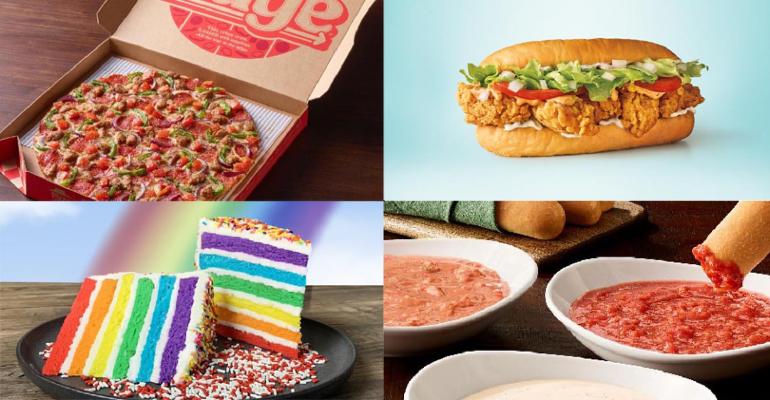 Olive Garden has long offered guests unlimited breadsticks, and now it has unlimited dipping sauces to go with them for a modest upcharge.

Pizza Hut is bringing back its Edge Pizza, first introduced in 1997, Church’s Chicken is reprising its popular summertime Smokehouse Chicken, and TGI Fridays is offering its rainbow cake as its annual Pride Month limited-time offer.

Little Caesars is rolling out pizza with a stuffed crust.

Watermelon season is upon us, and Clean Juice, Dutch Bros Coffee, Main Squeeze Juice Co. and Smoothie King are all marking the occasion with new items featuring the fruit. Your Pie, on the other hand, is reprising summertime peach items.

Baskin-Robbins, for its part, is marking the approach of summer with a “Sour Berry Slime” sauce meant to evoke summertime fun, along with a Summertime Lime “flavor of the month.” Bruster’s Real Ice Cream also has a Key Lime ice cream this month, along with a sorbet of mango and dragon fruit.

Citrus and beets are in Garbanzo Mediterranean Fresh’s summertime hummus, and Which Wich has a proprietary new MTN DEW flavor with lemonade.

In fried chicken news, Chili’s Grill & Bar has a new chicken sandwich and Sonic Drive-In has rolled out a chicken po’boy.