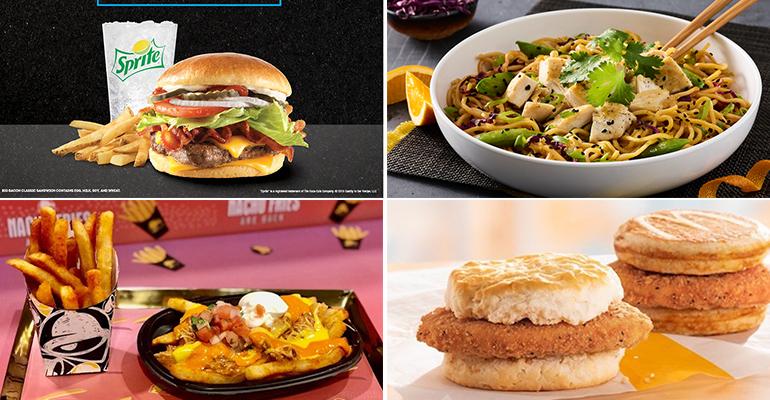 More chicken sandwiches are on offer this week; McDonald’s is expanding its chicken breakfast items from the southern states to the rest of the country to see how non-Southerners take to it, while Famous Dave’s is rolling out one with Southern-style “comeback sauce” and Slim Chickens is expanding its options with a bacon-ranch item. KFC, meanwhile, is expanding its test of vegan Beyond Chicken to the Nashville and Charlotte, N.C., markets.  Denny’s is also expanding its plant-based protein test, rolling out its Beyond Burger nationwide.

In other chicken news, Taco Bell has started putting shredded Buffalo chicken on its Nacho Fries, Noodles & Company has rolled out a chicken lo mein and Friendly’s has a new grilled chicken sandwich.

On the beverage front, 7-Eleven is turning one of its proprietary energy drinks into a Slurpee, Black Tap has introduced its first vegan milkshake and True Food Kitchen has introduce hot apple cider boosted with cinnamon, vanilla and powdered kudzu.

Dairy Queen has a chocolatey new Blizzard, Cousins Subs has a new Reuben and cheesesteaks, Urban Plates has new bowls, and Firebirds Wood Fired Grill has a whole line of new seasonal specials.

TooJay’s Deli is making French toast out of cinnamon rolls, Taco John’s is re-shaping tacos, Wendy’s is bringing back a classic from the ’90s, and for the first time Velvet Taco’s Weekly Taco Feature isn’t a taco at all.