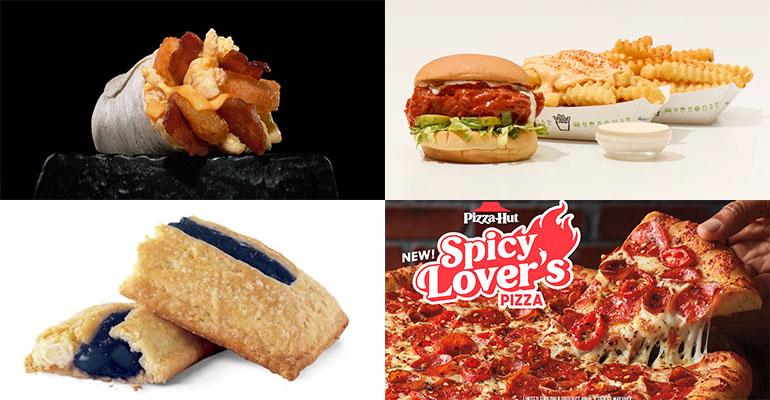 McDonald’s has brought back its  Blueberry & Crème Pie for the first time since 2017. It’s only available at around 6,800 locations, which of course is more locations than most chains even dream of having.

In other big chain news, Starbucks has new energy drinks and Pizza Hut has a spicy new pizza.

Sister chains Carl’s Jr. and Hardee’s have new bacon items, Bar Louie has a burger with bourbon jam (as well as bacon), and Shake Shack has a new Buffalo chicken sandwich with a hot sauce that you can also get on fries. Condado Tacos has a taco named Kevin, and MOD Pizza has a pizza name Callie.

Little Caesars, in anticipation of the latest Batman movie, has a Calzony that’s sort of shaped like the Bat Signal, and Randy’s Donuts has teamed up with Pepsi Cola for a pastry stuffed with Bavarian cream and pop rocks meant to evoke the sensation of drinking a soda, I guess.

Nekter Juice Bar has smoothies with a new “Metabolism Boost,” The Habit Burger Grill has a shake with breakfast cereal, Frutta Bowls has new cacao options and Saladworks is working with braised beef.

Pret A Manger has rolled out a sandwich made with meatless balls, Velvet Taco’s Weekly Taco Feature evokes a pork & shrimp eggroll and Insomnia Cookies is kicking off Valentine’s Day season with everything red velvet.