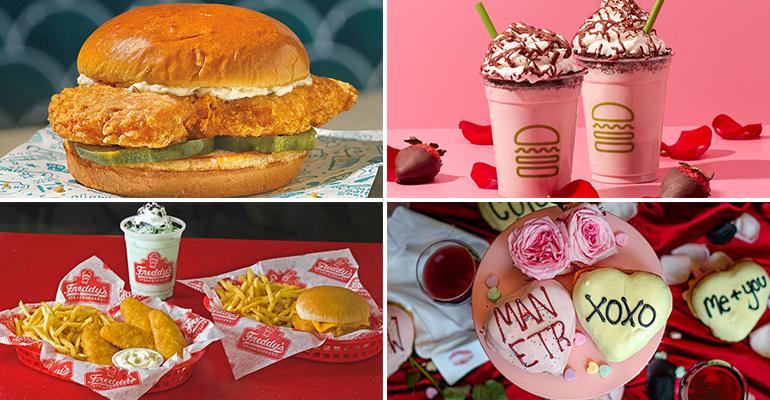 For Lent, which starts on Wednesday, Popeyes Louisiana Kitchen is taking its show-stopping chicken sandwich and swapping in flounder and tartar sauce.

That’s a time-tested practice, one that Bojangles is carrying out with the reprise of its Bojangler, made with pollock that is treated with the same spice blend as its chicken biscuit, which is so beloved that some people will reroute their flights so they can pick one up at the Charlotte, N.C., airport.

Freddy’s Frozen Custard and Steakburgers has a seasonal cod sandwich through early April. Golden Chick has one, too, although it will be available long past Easter and well into May.

Too many chains to mention are offering heart-shaped pizzas for Valentine’s Day, so we’re skipping coverage of that, but Shake Shack is teaming up with 1990s boy band Boyz II Men in a holiday promotion that will include a live performance by the group at 8 p.m. Eastern time on Feb. 14 on the burger chain’s Instagram and Facebook accounts, as well as a holiday milkshake. Velvet Taco is marking the holiday with its first-ever dessert taco, and Voodoo Doughnut is offering a couple of treats that can include customizable messages — short ones that can fit on a doughnut.

In a non-vegan move, you can now top you Toppers Pizza pies with prime rib.

Coolgreens, apparently betting that it’s still early enough in the year for people to try to keep New Year’s resolutions, is introducing some nutrient-dense items, while Chevys Fresh Mex is observing the end of dry January and the approach of National Margarita Day with the Rosé-A-Rita.

Eggs Up Grill has new brunch items, and Wow Wow Hawaiian Lemonade, marching to the beat of its own drum, is celebrating winter with cinnamon and apple.

Also, McDonald’s Shamrock Shake is back, and so is the a Oreo Shamrock McFlurry, which debuted around this time last year.

An error in the price of PLNT Burger's PLNT Egg Sammy has been corrected. Its description has also been adjusted to reflect that the Just Egg product is the folded version, not the scrambled one.
Start Slideshow ›
TAGS: Quick Service Fast Casual Family Dining
0 comments
Hide comments
Related
Sponsored