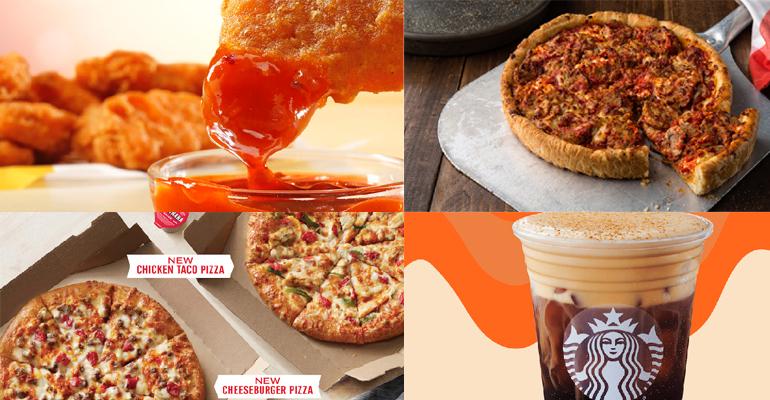 You might think it’s pumpkin spice season (it is: The Coffee Bean & Tea Leaf, Jamba and Starbucks all rolled out their seasonal items with pumpkin and autumn spices this week), but it’s also new-menu season, with whole new lineups from Cracker Barrel Old Country Store (including a Pumpkin Pie Latte), Uno Pizzeria & Grill and Veggie Grill.

Domino’s has introduced two new pizzas meant to evoke foods that don’t travel as well — burgers and tacos — and Papa John’s did something similar with its Buffalo Chicken Papadia.

Dicky’s Barbecue Pit has also rolled out something to wash down your food: Soda by the gallon.

Kung Fu Tea has two new tart drinks, and Bruster’s Real Ice Cream has a new drink made by topping your favorite sherbet with Sprite.

Krystal has teamed up with the National Pork Board to offer barbecue sliders, Donatos Pizza is extending its cauliflower crust line, and Qdoba Mexican Eats is testing a version of riced cauliflower in Indianapolis

Sweetgreen has rolled out locally sourced focaccia, from different bakeries in different markets, and Velvet Taco’s Weekly Taco Feature is made with shrimp.