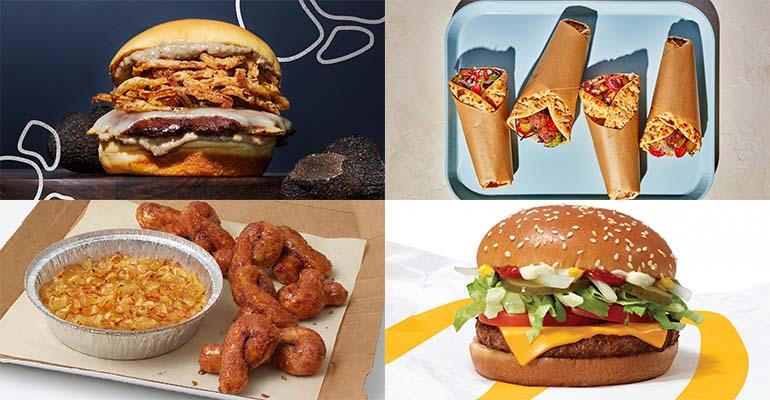 McDonald’s probably inevitable embrace of plant-based protein is coming a step closer next month when the Golden Arches test McPlant, made with Beyond Meat, in select United States locations.

In other big-chain news, Domino’s has a new line of incremental-sales boosters in the form of baked dips suitable for dipping its Bread Twists in for around eight bucks, and Subway has some new sauces and a curated sub. Dunkin’ is bringing back its Halloween-themed spider doughnut, plus a new flavor of macchiato.

Eureka! also has a couple of spookylicious new items, but other chains are pushing on toward Thanksgiving — witness Lazy Dog’s and Norms’ turkey dinners — or introducing more broadly seasonal food and beverages such as the apple items at Eggs Up Grill and Frutta Bowls.

Culver’s is celebrating a significantly more minor holiday, National Cheese Curd Day, with the launch of the CurderBurger, which was initially conceived of as an April Fools’ Day joke. Fields Good Chicken is celebrating the New York City Marathon with a special large plate of food for runners in that city, and Yogurtland is celebrating its 15th anniversary by noting its heritage as part of the boba milk tea concept Boba Loca, by offering a milk tea flavored yogurt.

Hard Rock Cafe, as it does every year, has specials for Breast Cancer Awareness Month.

The truffle burger and fries that Shake Shack offered in a few locations in California and New York last year are now available systemwide for the rest of the year. Probably coincidentally, Tocaya Modern Mexican is teaming up with truffle hot sauce company Truff for some new proteins.

Red Robin has new bacon fondue that you can put on your burger or eat on its own.

Cava, making use of the new and improved pita that it launched in August, has some new wraps, Yalla Mediterranean has hummus and drink specials and Pita Mediterranean Street Food is selling skepasti.

Lemonade has some seasonal sides and reconfigured sandwiches, Snooze has pumpkin pancakes, Pieology has a barbecue pizza and Fuzzy’s has a fajita taco.

Baskin-Robbins is evoking skillet cookies with its latest ice cream flavor and Velvet Taco is bringing back its Cheesesteak Taco as its Weekly Taco Feature.