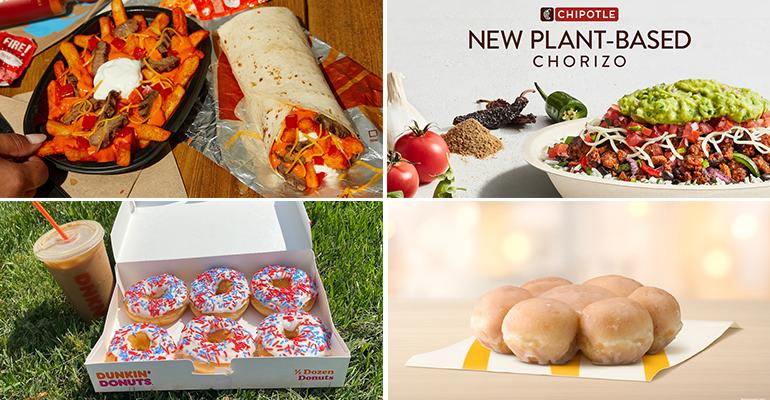 McDonald’s is expanding its pastry line with a limited-time offer of a bunch of doughnut holes stuck together, suitable for sharing or simply playing with.

Little Caesars also has a very shareable and playful new item that looks like four calzones stuck together by a tiny pizza.

Papa John’s is bringing back its charity-driven Shaq-a-Roni, which is just an extra-large pepperoni pizza with Shaquille O’Neal’s name attached to it, but part of the sales do go to charity and the chain said it raised more than $3.6 million from it when it launched it last year.

Southern California-based truffled hot sauce company Truff broke the news, that Taco Bell is using its sauce now, but don’t get too excited unless you’re going to be in Newport Beach, Calif., between now and the end of the month, because that’s the only way you can get it.

Tacodeli has a whole new menu, including Margaritas that you can swirl agua fresca into, and Fogo de Chão has added several seasonal items to its Market Table, as well as a porterhouse steak to its main Churrascaria Experience menu.

Panda Express has a new almond chicken, Starbird has a new chicken sandwich on a Dutch crunch roll — a specialty of Northern California — Panera is introducing a latte version of its Cinnamon Crunch Bagel and Pollo Campero has a new bowl featuring its new pico de gallo and smashed avocado.

Flame Broiler has a new salad, too.

Dunkin’, which is based in Massachusetts, is celebrating football season with a doughnut honoring New England’s football team. It’s only available in that region, probably because no one else would order it.

Yogurtland is celebrating back-to-school season with a frozen treat meant to taste like breakfast cereal, and Studio Movie Grill is celebrating the release of DC Movies’ The Suicide Squad with a boozy, rum-based cocktail.