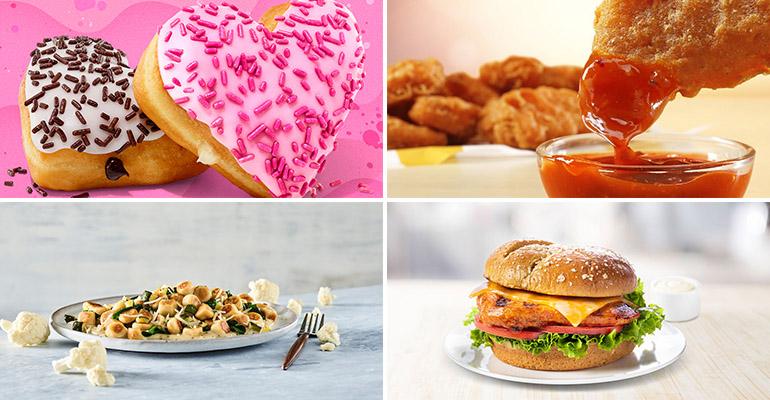 McDonald’s is bringing back its Spicy Chicken McNuggets and the hot sauce that comes with it, which it first introduced last fall, and that’s just the tip of the spiceberg: Sister chains Carl’s Jr. and Hardee’s have a new habanero ranch sauce, Panda Express is bringing back its Firecracker Chicken Breast to celebrate the lunar new year and Velvet Taco’s weekly taco feature has sweet chile shrimp. On top of that, Church’s Chicken has revamped its tenders, which are spicier now, and Chick-fil-A has a new chicken sandwich, not a fried one this time, that is treated with a spicy marinade. Quiznos is bringing back its seasonal lobster rolls in the runup to Lent, but it’s adding a new one made with the new Old Bay Hot Sauce.

The Habit Burger Grill has a new fried chicken sandwich, part of a new line of fried chicken items that it has been rolling out all month.

Pizza Hut has a whole new pizza line, inspired by the style of Detroit, and Noodles & Company now has gnocchi made with cauliflower.

Speaking of cauliflower, Donatos is serving roasted florets of the vegetable and calling them Cauliflower Wings for some reason.

Firehouse Subs is jumping on the Everything spice trend — inspired by the coating of sesame, garlic, onion and more on an everything bagel — but upping the bagel reference by adding cream cheese to its signature Hook & Ladder sub as well as coating the roll with spices.

BurgerFi is celebrating its 10th anniversary with special desserts, Dunkin’ is celebrating Valentine’s Day with heart-shaped doughnuts and Lazy Dog Restaurant & Bar is celebrating the success of its TV Dinners by adding another one.

Perkins has a new lineup of steak items, and Billy Sims BBQ, a small chain out of Tulsa, Okla., has a new cherry cheesecake dessert.