/sites/all/themes/penton_subtheme_nrn/images/logos/footer.png
Recent
Recent
Starbucks promotes regional vice president Dennis Brockman to global chief inclusion and diversity officer
Mar 05, 2021
Chick-fil-A’s annual $5 million True Inspiration Award is now exclusively for Black-led organizations or those that serve communities of color
Mar 04, 2021
Nearly 30% of restaurant operators say business won't return to normal for at least a year
Mar 04, 2021
Chipotle will be tying executive compensation to diversity and sustainability goals
Mar 04, 2021
Stimulus checks could give restaurants a boost for up to 7 weeks, research shows
Mar 04, 2021
Featured
Chain restaurants take to oat milk as a coffee enhancer as well as a dessert base
Mar 05, 2021
Beyond Meat announces partnerships with McDonald’s and Yum Brands
Feb 25, 2021
McDonald’s commits to leadership diversity; 35% of leadership roles will be held by people from underrepresented groups by 2025
Feb 18, 2021
Just Salad makes reusable bowls available for pickup orders, with delivery in the works
Feb 22, 2021
Menu Tracker
brought to you by
Menu 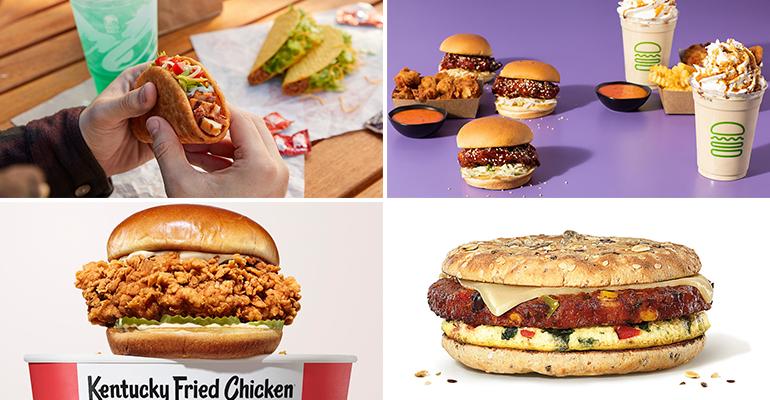 There’s a dark joke circulating around that COVID-19 actually refers to the number of pounds that people have gained during the pandemic. The new year is always a time for rolling out menu items intended to help people meet their resolutions to eat more healthfully, and that mission has perhaps an added sense of urgency this year. Chipotle Mexican Grill, El Pollo Loco and Freebirds World Burrito are all doing their part by adding the option of riced cauliflower to replace actual rice.

Fazoli’s, Subway and Your Pie have also introduced low-carbohydrate options.

Juice it Up! is offering new options intended to boost immunity, Yogurtland has a new dairy-free option and Peet’s Coffee is leveraging the “golden latte” trend that started a few years ago by adding turmeric to some new drinks.

Conversely, breaded and fried chicken sandwiches continue their apparent mission to take over the world with new options from Golden Chick, KFC, McDonald’s, Shake Shack and Sonic Drive-In, and Whataburger has extended the availability of its spicy chicken sandwich and upgraded its bun.

Elsewhere in indulgent sandwiches, Frisch’s Big Boy has new grilled cheese sandwiches, and Krystal is celebrating the new year with its Hangover slider.

New plant-based protein options are available at Dunkin’ and Pizza Guys, and Starbucks is finding new things to do with almond milk.

Baskin-Robbins flavor of the month has three kinds of chocolate, Torchy’s Tacos’ taco of the month is a play on lox and bagels, and Velvet Taco’s weekly taco feature is its version of a French dip, complete with au jus.

Taco Bell is bringing back its Nacho Fries and other favorites, Daphne’s has new wraps, TooJay’s Deli has a vegetable-forward pasta and First Watch has a new açaí bowl and avocado toast.