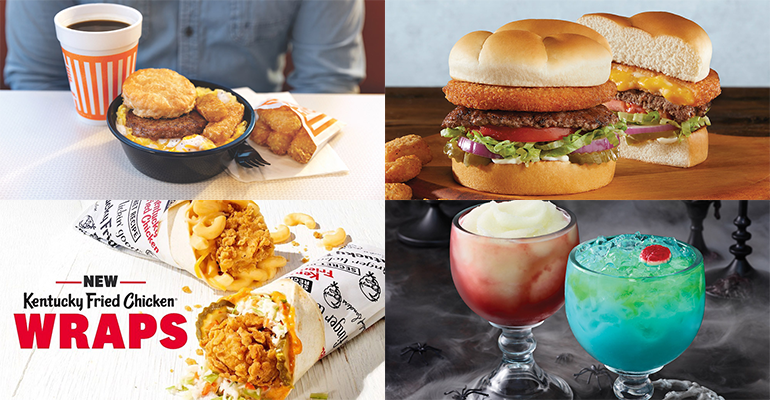 KFC is testing wraps in Atlanta, which is pretty big news in the world of fried chicken, but also of interest is the fact that Fuku, Momofuku’s fried chicken sandwich concept, is bringing back its original chicken thigh sandwich at two locations in New York City.

“Fuku was originally built off of a thigh meat chicken sando when we first opened in 2015, and it was arguably the juiciest and crispiest chicken sando out there,” he said. “As we expanded outside of our home market of New York City in the years ahead, guests increasingly asked for a white meat version, which ultimately inspired us to shift to a new sandwich recipe using chicken breast in 2020. Like so many others, we've been feeling pretty nostalgic these past couple of years, and it felt like the right time to honor our roots and satisfy our diehard fans by bringing the Dark Meat Sando back in all its O.G. glory.”

Speaking of nostalgia, Cotton Patch Café is offering meat ball sliders, which might not technically be old-school, but seems nostalgic anyway, Applebee’s has a rather traditional new burger on the menu, and Potbelly is reprising its fan-favorite pastrami sandwich.

It’s unclear why California Tortilla has new items named for an old song by The Doors, but maybe nostalgia has something to do with that, too.

Speaking of chicken, Smashburger is selling wings, which is also kind of a big deal, Zaxby’s is putting its signature fried bird on fries, Newk’s Eatery has some new Buffalo chicken items, Pokeworks has spicy chicken in a bowl (or burrito), and Tropical Smoothie Cafe has some new chicken flatbread.

Culver’s, for its part, is bringing back its Curder Burger, which started as an April Fool’s joke, but it turns out, unsurprisingly if you think about it, that people want a fried cheese patty on top of their hamburger.

It is Halloween season, which is being celebrated with new items from Applebee’s, Eureka!, Gong Cha, and Insomnia Cookies.

Pret à Manger has a whole lineup of new menu items, and Condado Tacos has quite a few, too.

In vegan news, there’s new oat milk soft serve at 16 Handles, and Next Level Burger has a dairy free pumpkin spice shake and a meat-and-cheese-free version of a cheeseburger.

Gregory’s Coffee and Beyond Juicery + Eatery have seasonal drinks, Sprinkles has a pumpkin spice cupcake, Voodoo Doughnut has a doughnut version of a caramel macchiato, Whataburger has a breakfast bowl and Velvet Taco has its own version of a Texas delicacy: The walking taco.