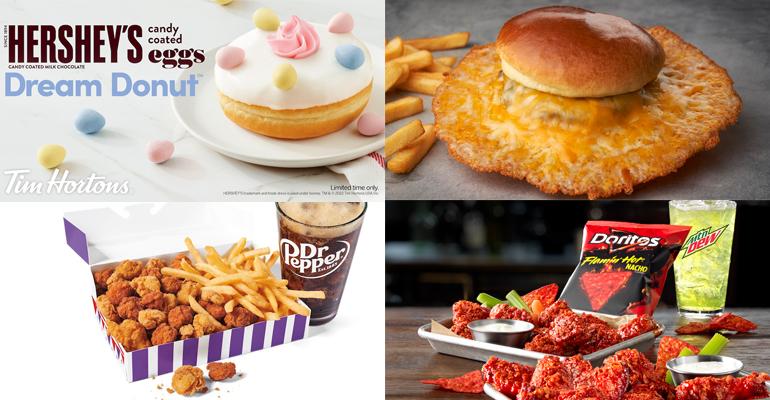 YouTube personality Emma Chamberlain loves Cava’s spicy hummus, literally. She literally said that on Instagram. She said, “I literally love ur spicy hummus i ate an entire tub in one sitting once”.

In celebration of that, the fast-casual Middle Eastern chain has named a bowl and a snack after her, at least for the next few weeks.

Elsewhere in spicy food, Moe’s Southwest Grill has added spicy chicken to its lineup, Peter Piper Pizza has a spicy meatball pizza, Blimpie has Nashville hot chicken, Buffalo Wild Wings has Doritos Flamin’ Hot Nacho Wings, Hot Dog on a Stick has a new jalapeño ranch dipping sauce, Jack in the Box has spicy cheese fries as well as popcorn chicken that can be spicy if you want it to be, Mellow Mushroom has spicy beer cheese, plus wings with giardiniera, the sometimes spicy pickle mix that goes with Chicago-style Italian beef. Italian beef, by the way, is the inspiration for Velvet Taco’s Weekly Taco Feature.

Friendly’s has a dozen new items; you can get fig jam there now.

Applebee’s is bringing back its Irresist-A-Bowls, including a new one with broccoli cheddar mac & cheese, plus some more cocktails, and Abuelo’s Mexican Restaurant has a new raspberry hibiscus Margarita.

Studio Movie Grill has a drink with proceeds going to Autism Speaks, Voodoo Doughnut has a treat to raise money to fight ovarian cancer and MOD Pizza has a new Squad Cake, which raises money for crew members in need,

Andy’s Frozen Custard has waffle cones, Donatos has a new version of its dessert twists, Tim Hortons has an Easter doughnut and Frisch’s Big Boy is celebrating baseball season with sliders.

Oh, I just got that joke.