/sites/all/themes/penton_subtheme_nrn/images/logos/footer.png
Recent
Recent
Panera experiments with robots
Dec 02, 2022
The Recipe of Success: What you can learn from James Corden
Dec 02, 2022
Quiznos parent company appoints Vanessa Fox as company’s first chief development officer
Dec 02, 2022
The third-largest pizza chain is ready for a war
Dec 02, 2022
DoorDash’s layoffs are not a time to panic: they’re a time to rethink the delivery industry
Dec 01, 2022
Featured
How 21 restaurant companies performed in their most recent quarters
Nov 22, 2022
How eco-friendly Seattle restaurant chain Just Poke is doubling in size in 2022
Nov 17, 2022
In the Mix this week: White Castle’s culture, a CREATE recap, Denver’s restaurant scene and more
Oct 27, 2022
How this emerging brand is planning on nearly quadrupling in size in just one year
Oct 21, 2022
Menu Tracker
brought to you by
Menu 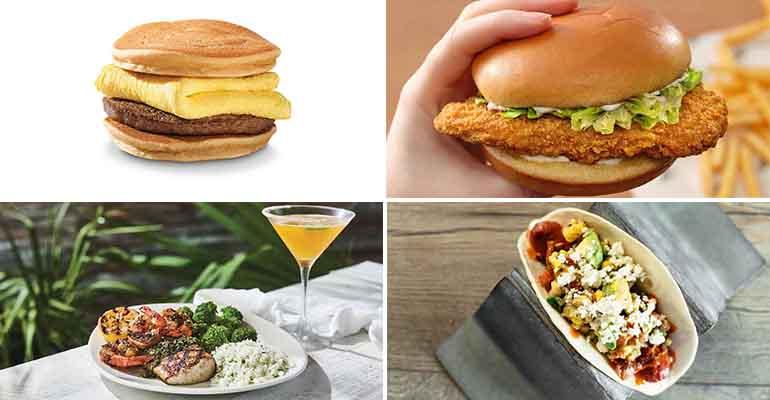 The Black Seed Bagels “collabs” are back. The New York City chain is once again collaborating with other restaurateurs in the city for a monthly special; this time it’s an ice cream sandwich.

There are two new chicken sandwiches this week: One from Atomic Wings and one in test by Hardee’s in Columbia, S.C.; Des Moines, Iowa; and Huntsville, Ala.

Krystal has new chicken strips, Your Pie has a new chicken pizza, Mellow Mushroom has two new chicken wing sauces and KFC Canada is rolling out a chicken-free vegan sandwich.

Bonefish Grill has launched online ordering, as well as a bunch of new surf-and-turf combinations, and it’s also bringing back a few old-timey favorites.

Modern Market Eatery has new seasonal items as well as meal kits, Lazy Dog Restaurant & Bar has two new beers, and you can now get a porterhouse steak as part of your Fogo de Chão “churrasco experience.”

Yogurtland has a new dairy-free flavor, and Velvet Taco’s weekly taco feature is made with a hot dog.