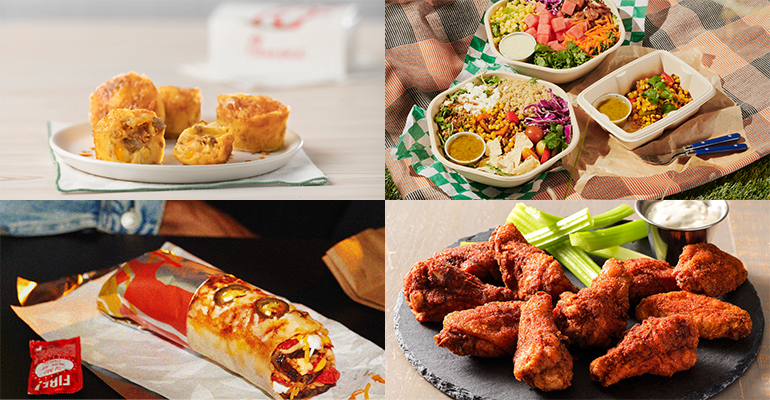 Taco Bell has long been praised by animal rights groups and vegetarians for its many high-protein vegetarian options, thanks to the fact that beans are always on offer on the menu, but the chain is also testing the waters of meat substitutes, but only in Birmingham, Ala., at the moment. Alabama might seem like an unusual choice to test plant-based protein, but many chains have reported enthusiastic trial of these meat analogs across the country, not just in the trendy coastal areas where their popularity might be expected. The challenge is getting people to come back for more once they have tried it the first time. Maybe Taco Bell will lead the way in establishing whether customers prefer plant-based meat analogs over actual plants, such as beans.

Elsewhere, the seasonal phenomenon that is pumpkin spice continues its progress with new items at Jamba and La Madeleine.

Culver’s is using Kellogg’s granola in its latest custard flavor, The Habit Burger Grill has a chicken sandwich with pesto, and Smashburger is reprising its spicy chicken sandwich.

Lenny’s Grill & Subs has a brand new spicy chicken sandwich and Wings Over has one that isn’t spicy but has a lot of cheese.

Jollibee has opened a new flagship location in New York City and has introduced some new items there, possibly to roll out nationwide.

Gott’s Roadside has a seasonal BLT with heirloom tomatoes, plus avocado, Chopt has new dressings and new salads to dress them with, and Bad Daddy’s Burger Bar is slicing poblano peppers, battering them, frying them and serving them like French fries.

Bad Ass Coffee of Hawaii is part of a small but growing trend of blending cold brew coffee with lemonade, and Dutch Bros is expanding its energy drink line with one flavored with orange and vanilla.

Sweetgreen is reprising popular items from summers past, Insomnia Cookies has some back-to-school treats, Rush Bowls has a new bowl inspired by the Mai Tai cocktail, and Velvet Taco is taking a Puerto Rican stewed chicken preparation and adding some Mediterranean elements for its Weekly Taco Feature.