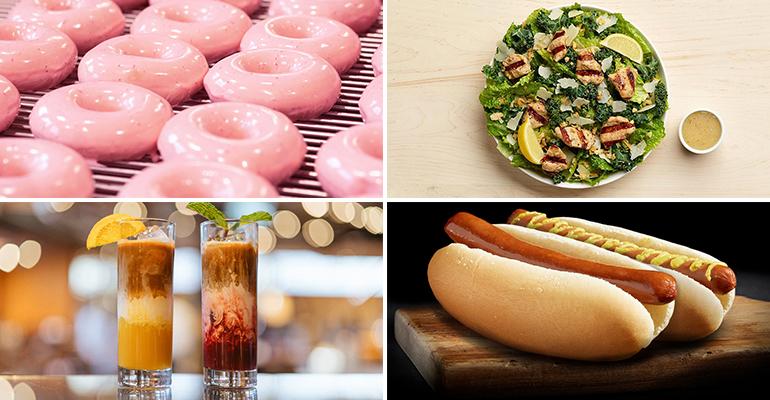 It is strawberry season, and you can tell with offerings featuring the fruit at Baskin-Robbins, BJ’s Restaurant & Brewhouse, Bob Evans, Dunkin’, Krispy Kreme and Voodoo Doughnut. Baskin-Robbins’ strawberry special is also dairy free — made with oat milk — and sister brand Dunkin’ is rolling out coconut milk, which is kind of a big deal.

Also kind of a big deal is the fact that Chick-fil-A has a brand new entrée salad. Donatos has a new one, too. Salata Salad Kitchen has several new ones.

Starbucks, meanwhile, has devised new cocktails and espresso-fruit combinations, which would be a very big deal except they’re only available at its three Starbucks Reserve and Starbucks Reserve Roastery locations.

Cracker Barrel Old Country Store has several new items, including beignets made out of biscuit dough, Cava has a new lamb entrée.

Red Robin Gourmet Burgers & Brews has some new items with bacon that are being promoted on TikTok with a dance challenge from celebrity dancer Derek Hough.

Del Taco has expanded its Crunchtada line, Stan’s Donuts has new milkshakes and a cold brew float and Nathan’s Famous is rolling out a meatless hot dog (and it also has a very meaty, and lobster-y Surf ’N Turf hero at its Coney Island location.)