/sites/all/themes/penton_subtheme_nrn/images/logos/footer.png
Recent
Recent
What does a ‘record-breaking’ Black Friday weekend mean for restaurants? It’s complicated
Dec 02, 2022
The third-largest pizza chain is ready for a war
Dec 02, 2022
DoorDash’s layoffs are not a time to panic: they’re a time to rethink the delivery industry
Dec 01, 2022
How Checkers & Rally's plans to adjust as other brands adopt its double drive-thru model
Dec 01, 2022
How a local grain became the star ingredient of the stand-out pita at Gavin Kaysen’s latest restaurant
Dec 01, 2022
Featured
How 21 restaurant companies performed in their most recent quarters
Nov 22, 2022
How eco-friendly Seattle restaurant chain Just Poke is doubling in size in 2022
Nov 17, 2022
In the Mix this week: White Castle’s culture, a CREATE recap, Denver’s restaurant scene and more
Oct 27, 2022
How this emerging brand is planning on nearly quadrupling in size in just one year
Oct 21, 2022
Menu Tracker
brought to you by
Menu 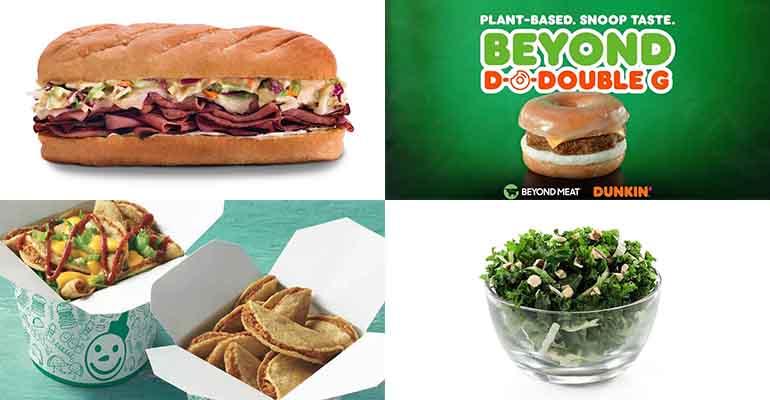 Reubens are in play this week in Florida, with Firehouse Subs and TooJay’s Deli, both headquartered in the Sunshine State, introducing their own versions of the sandwich. Also in play for some reason are meatless versions of cheeseburgers on pizza: Both Boston’s Pizza Restaurant & Sports Bar and Uno’s Pizzeria & Grill are putting Beyond Meat’s vegan crumbles and traditional burger fixin’s on flatbread.

Pollo Tropical, meanwhile, is putting Beyond Beef in bowls and wraps.

New actual burgers — on buns and with beef — are on offer from Bad Daddy’s Burger Bar, while another burger specialist, Jack in the Box, has reintroduced its Tiny Tacos, now with a new avocado sauce.

Smokey Bones Fire & Grill is offering smoked bologna sliders, among other new items, as part of a broader menu revamp (expect more from them later this year), and Dat Dog is using bologna’s refined cousin, mortadella, as part of its limited time Stoney Bologna creation.

Dunkin’ is doubling down on its partnership with Beyond Meat by putting that company’s sausage on a doughnut that’s actually part of a new apparel collection with Snoop Dogg.

Flower Child has resolution-oriented specials — one complying with the Whole 30 plan and the other with the ketogenic diet. So has Piada Italian Street Food

Sister coffee brands Gloria Jean’s and It’s a Grind have more indulgent specials, as has Mazzio’s which is bringing back it’s stuffed mashup, the Quesapizza. Velvet Taco is also doing a mashup with its Cheesesteak Taco.

French onion soup is on the menu at McAlister’s Deli, and MOD Pizza has introduced a new Calabrian chile red sauce for its latest LTO, the Lucia. Panda Express has added spicy Firecracker Shrimp to its menu in celebration of the lunar new year.

Voodoo Doughnut has a tea-themed special, proceeds of which go in part to the National Alliance to End Homelessness.