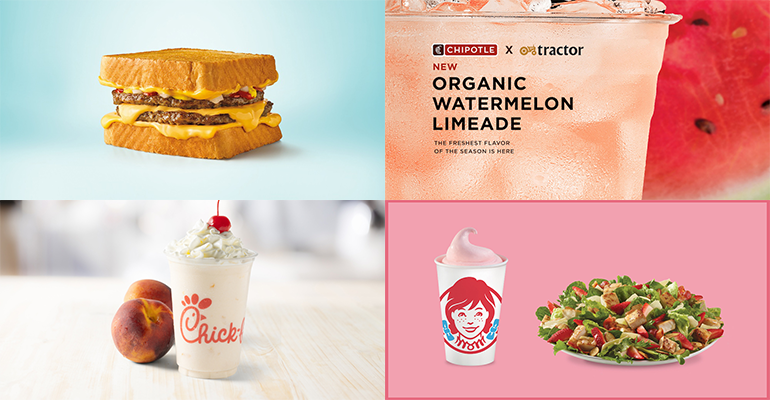 It’s not the only chain to introduce a watermelon item this week; so have Clean Juice, First Watch, Orange Leaf and Red Mango.

Clean Juice is mixing some of its watermelon with strawberry, another seasonal fruit that’s also being featured at Grimaldi’s Pizzeria, La Madeleine (although it’s a permanent addition), Wendy’s and Yogurtland.

Peaches are also in play. Chick-fil-A has brought back its peach milkshake, and Sweetgreen and Your Pie are featuring the fruit, too.

Taco Cabana has a cherry Margarita, and McAlister’s Deli has sweet tea ice cream and it’s about time.

Walk-On’s has a slider flight.

Any season apparently is the right season for Red Bull, so Fosters Freeze and Ziggi’s coffee are featuring items using the energy drink. Meanwhile, Bad Ass Coffee of Hawaii, Peet’s Coffee (which also will be offering brown sugar jelly from now on) and Potbelly are using the grandfather of energy drinks — coffee.

But not PJ’s Coffee, which is focusing on tea and something called Cloud Drinks, which are coconut milk-based.

MOD Pizza has not forgotten that it’s Pride Month, and is offering a cake with rainbow sprinkles in celebration (and donating some proceeds to charity).

BD’s Mongolian Grill has some new Japanese- and Korean-influenced items, Chuck E. Cheese has sweet chile pizza, and Pie Five is honoring Maggie Fox, who has worked there for 12 years, with a pizza of her own.

Cava is bringing back its Lemon Chicken Bowl and Taco Del Mar is reprising its seasonal lobster tacos.

Smokey Bones has brunch bowls now, Wayback Burgers has a Sour Patch Kids shake and Velvet Taco is continuing its salad-themed taco series with one inspired by Cobb salad.