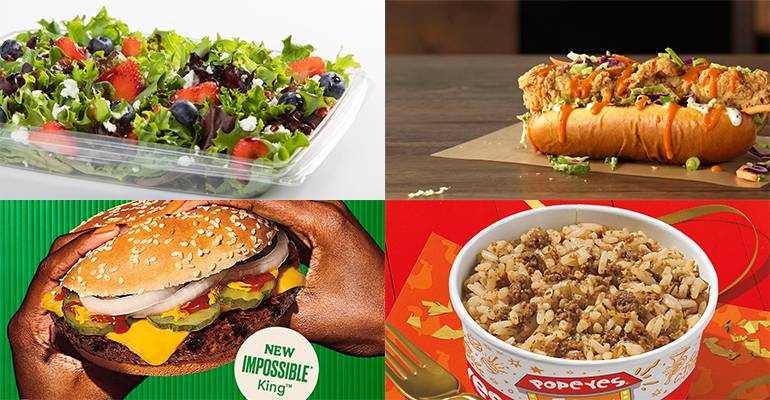 Some chains have rolled out plant-based substitutes for meat or dairy with great fanfare and then gradually phased them out as initial enthusiasm by customers to try them didn’t result in trying them again.

But others have doubled down and added new animal-free items, such as Carl’s Jr.’s Beyond Wraptor Burger, introduced as part of its tie-in with the film Jurassic World Dominion.

And now Burger King, the first national quick-service chain to roll out a burger made from the current generation of plant-based protein, has added new items made with Impossible Burger.

Smashburger is also entering the plant-based arena with a line of dairy-free shakes.

Krispy Kreme, on the other hand, is plunging into dairy with a new line of soft-serve made with the same ingredients as its glazed doughnut.

Speaking of swerving out of your lane, Starbucks now has a breaded chicken sandwich in the United States for the first time.

Popeyes Louisiana Kitchen doesn’t have a new chicken item, but it is bringing back its Cajun Rice, which it discontinued last year, as part of its 50th anniversary celebration.

Auntie Anne’s has new dragon fruit beverages, Corner Bakery has berry drinks, Juice it Up! has a watermelon smoothie, and so does Robeks, and Mooyah Burgers, Fries and Shakes has a peach cobbler shake.

Blaze Pizza has a berry salad.

Genghis Grill has a new bowl based on the seafood boils of the Low Country.

Denny’s has the latest installment of its Social Stars Influenced Menu that features meals inspired by popular TikTok performers, and IHOP has a bunch of items tied into the release of the Universal Pictures film Minions: The Rise of Gru.

Twin Peaks has new ribs, On the Border has tlayudas, Native Grill & Wings has new Buffalo-themed items, Casey’s has brisket pizza and Happy Joe’s has pizza with three shapes of pepperoni.

Cinnaholic has new sweet rolls and Velvet Taco is continuing its offerings of Weekly Taco Features based on salads with a Chicken Caesar Taco.