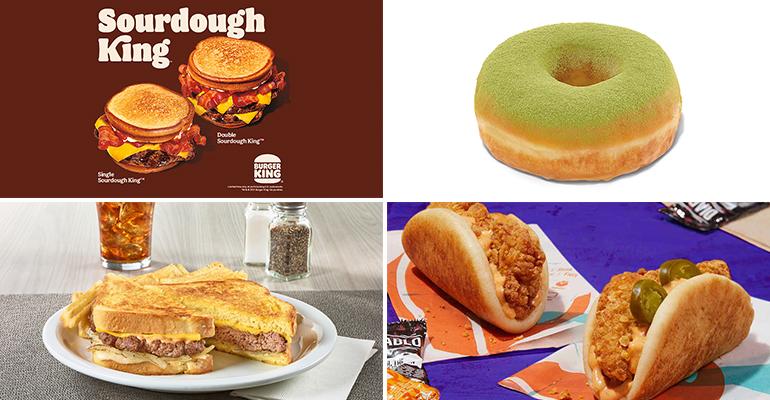 Jumping on the inexorable fried chicken sandwich bandwagon, Taco Bell has announced plans to roll out a Fried Chicken Sandwich Taco. It’s really a fried chicken sandwich on folded flatbread, but they’re calling it a taco to stay on-brand, and they’re not rolling it out just yet: They’re testing it, starting in a couple of weeks, in two medium-sized markets.

Taco Bell is by no means the first chain to offer fried chicken tacos; in fact, Velvet Taco’s currently Weekly Taco Feature has fried chicken in it, and Smokey Bones’ new line of street tacos includes a fried chicken one.

McDonald’s is launching three new fried chicken sandwiches this week, but you won’t read about them here because we reported on them in January, both in Menu Tracker, and in a separate story all its own, plus a story about how fans could get the sandwich a day early.

But in this Menu Tracker you will read about PDQ’s new spicy fried chicken sandwich, as well as Denny’s new Fried Chicken Melt, The Habit Burger Grill’s new Patty Melt, and Dunkin’s new Grilled Cheese Melt (a grilled cheese sandwich by another name).

A week into Lent, Smashburger and Slater’s 50/50 are offering fried fish sandwiches and Newk’s Eatery has a couple of new shrimp options. Miguel’s Jr. is also offering a new meatless option: Potato taquitos.

Moe’s Southwest Grill has a new burrito, bowl and quesadilla inspired by the chicken club sandwich, Great American Cookies is stuffing its chocolate chip cookie with peanut butter cups, Einstein Bros. Bagels is serving smoked brisket on a spicy new bagel, and Burger King is going into its archives for its latest limited-time offer: The Sourdough King, introduced in 2018.

Bartaco is kicking off a month of weekly Margaritas, starting with one made with pineapple.