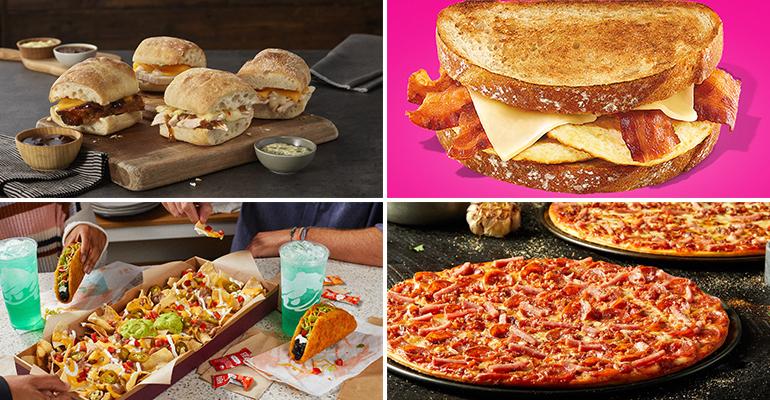 Boston Market has added a whole new late-night menu, and Taco Bell has grouped a bunch of existing items into its new Veggie Cravings menu, and also added two brand new items to it: A Black Bean Chalupa and a Veggie Nachos Party Pack.

Beans, of course, are the original plant-based protein, but California Pizza Kitchen, Golden Krust and The Hummus and Pita Co. are all adding the newfangled kind, and a new concept, Zombie Burger, has two options for meat substitutes on any of its burgers.

In other burger news, Slaters 50/50 is bringing back its seasonal Thanksgiving Burger and Fatburger is reminding us that there’s just over two months left in this horrible, horrible year with The Hang-in-There-Burger.

Bartaco and Boston’s Pizza have a different approach to getting through the year: New cocktails.

If you’d rather drink something rich and cold, there are new frozen drinks at Auntie Anne’s and Nathan’s Famous. Dunkin’s has some more seasonal drinks, hot and cold, plus a new sandwich.

In pizza news, besides CPK’s new meatless item, Donatos has a bacon-heavy duo, Zalat Pizza has a Reuben Pizza with Thousand Island sauce, corned beef and sauerkraut, and Colorado-based Pizzeria Locale has collaborated with local chef Caroline Glover to make a pizza for charity.

Grimaldi’s Pizzeria does not have a new pizza, but it is selling pumpkin cheesecake.

What? You ask. No new fried chicken sandwiches?

On the contrary: Church’s has rolled one out nationwide with callouts to other signature items — its honey butter biscuits and the pickled jalapeño that comes with its spicy chicken. Zaxby’s is offering a new chicken sandwich, but only in parts of Tennessee and Kentucky for now, The Salad House, a three-unit-chain in New Jersey, has a fried chicken sandwich as part of its new seasonal menu, and the Weekly Taco Feature at Velvet Taco is called the KFC (Kimchee Fried Chicken).