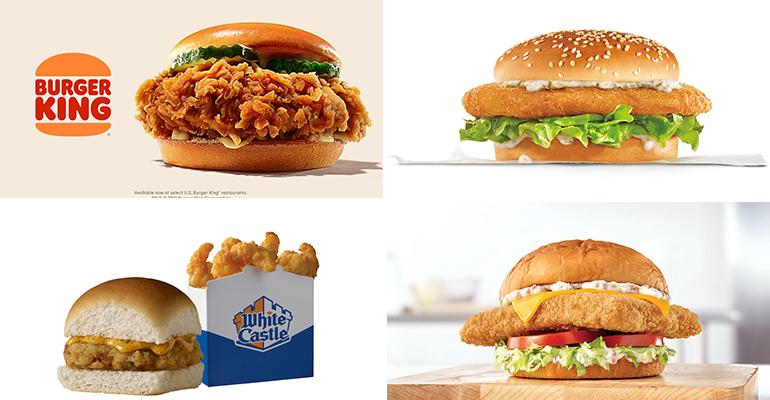 With the arrival of Lent comes the last round of seafood-related limited-time offers for the season, which ends on Easter Sunday, April 4. There are fish sandwiches at Arby’s, Boston Market, Buffalo Wild Wings, sister chains Carl’s Jr. and Hardee’s (which appear to have slightly different types of lettuce at the two concepts), Frisch’s Big Boy, Joella’s Hot Chicken (a fast-casual concept based in Louisville, Ky.), Roy Rogers and TooJay’s Deli.

In a similar vein, Fuzzy’s Taco Shop and White Castle have shrimp items, and Velvet Taco’s weekly taco feature has alligator, which might not usually be thought of as seafood, but it kind of is.

Other chains are taking this moment, when an estimated 14% of Americans refrain from eating meat on Friday, to introduce meatless items. Wayback Burgers is making the vegan Impossible Burger a permanent part of its roster, Jersey Mike’s Subs has introduced a portobello mushroom sandwich and B. Good, working with lentils.org, has introduced a vegetarian Mediterranean bowl.

Two of Dog Haus’s virtual-brand spinoffs, Bad-Ass Breakfast Burritos and Bad Mutha Clucka, have new collaborations with YouTube star Sam Zien, aka Sam the Cooking Guy, and Krispy Kreme is offering a one-day-only doughnut in celebration of the Feb. 18 landing of NASA”s Perseverance Rover on Mars.

Wendy’s has a new fried chicken sandwich, too, and so does Pollo Tropical. Rooster & Rice, a 9-unit chain in San Francisco specializing in the Thai chicken-and-rice dish khao man gai (which is itself a variation of the Malaysian dish Hainan Chicken, named after an island in China where many Malaysians’ ancestors came from) is offering Chinese rice porridge as a springtime special.