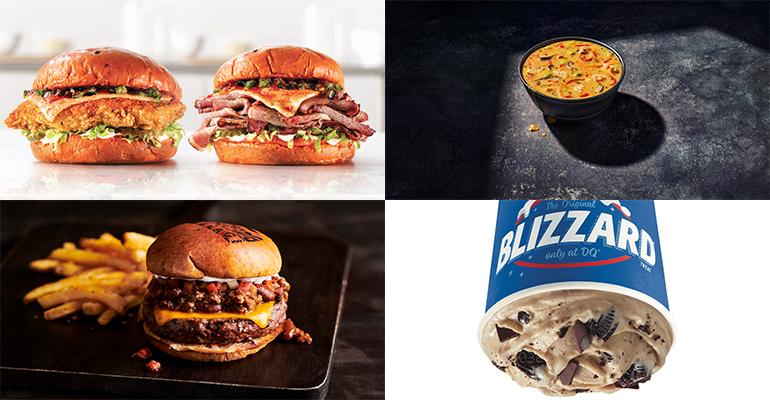 Panera Bread has a new Asian citrus salad and the first of what the chain says is a whole calendar of new soups. The new Thai Chicken Soup will be followed by Mexican Street Corn Chowder this summer followed by Cajun Shrimp & Andouille Sausage, Greek Lemon Chicken & Farro and Cuban Black Bean & Poblano.

Usually chains don’t announce new items that far in advance, but there you have it.

Burger King, which periodically offers a patty melt on sourdough, is testing new iterations of sandwiches on toast: Whopper melts in Toledo, Ohio, and breakfast melts in Buffalo, N.Y.

Pokeworks is testing a plant-based version of Spam.

In other meatless news, Wienerschnitzel has new veggie dogs and Blimpie has a meatless meatball Parmesan.

Arby’s has the meats, of course, and just launched two sandwiches made of them that are so spicy they come with a free vanilla shake.

PDQ has a chocolate cake shake that celebrates the Tampa Bay Buccaneers.

Miller’s Ale House has a new burger topped with pimento cheese, Ford’s Garage has a chili cheeseburger as part of its limited-time comfort food menu, Hopdoddy has a lamb burger and Hard Rock Cafe has one named after soccer sensation Lionel Messi, suitably named the Messi Burger.

Krystal has a tiny burger dressed in country gravy, as well as new sausage & gravy bites.

You can get couscous as the base of your bowl as Sajj Mediterranean now, Lion’s Choice has tomato soup and Tropical Smoothie Cafe has a new smoothie that’s supposed to taste like a Hurricane cocktail.

Bojangles has reworked its salad, and Sweetgreen has seasonal ones.