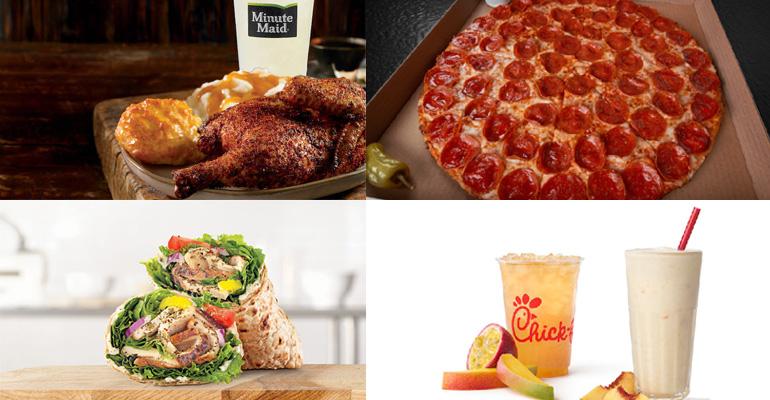 Dining rooms are closing again as the novel coronavirus pandemic picks ups speed, and more restaurants are responding with family meals. On the Border has a taco kit that can feed four people, and WaBa Grill has a new four-person Family Feast.

It being July, some Independence Day-themed items have been launched, including red, white and blue doughnuts from Tim Horton’s and a red, white and blueberry bowl from Vitality Bowls. In a similar vein, Pizza Guys has a new spicy Fireworks Pizza available this month.

In fresh-themed fare, Arby’s has rolled out three new wraps in its Market Fresh Line, Chopt has new Mexican-themed salads and bowls, and Del Taco has swapped out its frozen guacamole for a new recipe made fresh in-house.

Cotton Patch Café is taking a different approach with its new chicken-fried bacon, and Papa John’s Pizza is also going in the indulgent direction with its largest pepperoni pizza slices to date.

MOD Pizza also has a Mexican-inspired item this month. The Diego has chorizo and roasted corn and is finished with cilantro.

Rusty Taco has a summertime special with pork and tomatillo salsa, and of course Velvet Taco has its Weekly Taco Feature, this time with chicken tenders and ranch dressing.

Finally, the parade of new chicken sandwiches marches on with TKK Fried Chicken rolling out a spicy chicken sandwich which also is available at locations co-branded with Kung Fu Tea.

The description of Papa John's Shaq-a-Roni pizza has been updated to reflect that it has extra cheese and pepperoni, but not necessarily twice the amount of a regular Papa John's pepperoni pizza. More precise pricing information about Arby's new items has also been added. An error in the price of Pizza Guys' Fireworks Pizza has been corrected.
Start Slideshow ›
TAGS: Fast Casual Quick Service Family Dining
0 comments
Hide comments
Related
Sponsored