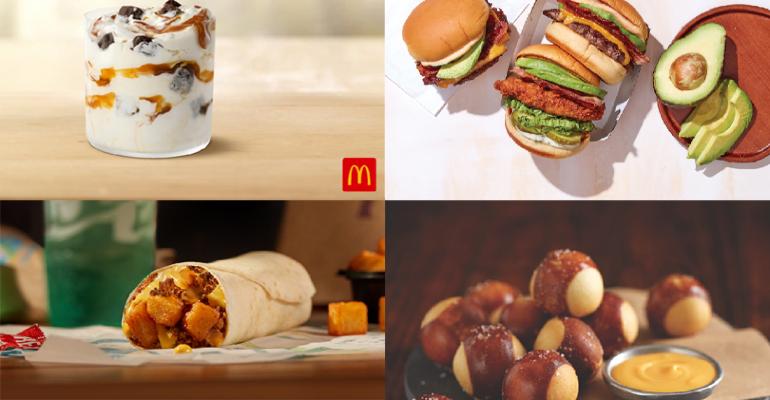 McDonald’s is introducing the Caramel Brownie McFlurry to restaurants nationwide next month. That particular McFlurry was first launched in 2017 in Canada, which is also the country where McFlurry treats were invented back in 1995, in Bathurst, New Brunswick, by franchisee Ron McLellan. There’s a little trivia straight from McDonald’s Chicago headquarters.

Taco Bell is continuing the expansion of its potato offerings, which were removed due to menu-trimming measures last year, with the relaunch next week of the Beefy Potato-rito. Lime Fresh Mexican Grill is also taking the beefy route with its new carne asada burrito.

Shake Shack is offering sliced avocado on its burgers and sandwiches for the next couple of months, and The Original Chop Shop is putting avocados in a shake.

Krispy Kreme has teamed up with Oreo for a new chocolate glaze, while Voodoo Doughnut’s special treat this month is filled with lemon buttercream.

Juice it Up! has some special smoothies made with açaí.

In bread-and-cheese news, Casey’s General Store has new cheesy breadsticks and Culver’s has brought back its pretzel bites with Wisconsin cheddar sauce, permanently this time.

Cowboy Chicken has turned its rotisserie specialty into a breaded and fried sandwich, and Fields Good Chicken is using leftover meat from its whole birds in Zero Waste Tacos.

Velvet Taco’s Weekly Taco Feature has Chicken Parmesan in it, and both Zalat Pizza and Papa Murphy’s have new chicken pizzas. Spicy chicken wings are part of Bellagreen’s spring lineup.

Lent might be over, but Daphne’s is celebrating the warmer weather with two new fish entrées.