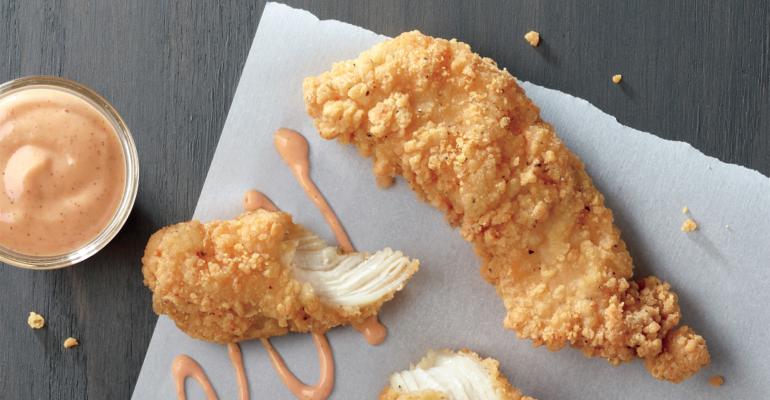 With rising demand and falling costs, this is a game of chicken where everyone wins Two of the Big Three burger chains are engaged in a sort of chicken fight.

McDonald's at the end of September launched Buttermilk Crispy Tenders. The seasoned, battered, breaded and deep-fried chicken product is a permanent, premium addition to the menu, available in available in 4-, 6-, and 10-piece servings, starting at $3.79 for 4 pieces.

Just two weeks later, Wendy's introduced its chicken tenders. Although the smallest of the Big Three burger chains — at around 5,700 domestic units, compared to McDonald's more than 14,000 and Burger King's 7,200 — kind of pitched the tenders to me as a response to McDonald's new item, they acknowledged in a press release that the product was two years in the making and later told me it's part of a $30 million investment to source "better-tasting, more tender and flavorful chicken." Wendy's tenders start at $3.49 for three pieces, and four pieces are $4.19. Both Wendy's and McDonald's tenders are permanent additions to the menu and, interestingly, both chains also introduced a new sauce to go with their tenders. McDonald's describes its new Signature Sauce as "the perfect balance of sweet and tangy."

A Wendy's spokeswoman is a bit more thorough in her description of the new “Side of S'Awesome” sauce.

"The sauce is inspired by fan-favorite condiments," she said in an email, "featuring the best of everything: the creaminess of ranch dressing, the smoky flavors of barbeque, a teeny kick of hot sauce, a hint of honey mustard and a dash of Worcestershire sauce."

Burger King is sitting out this particular round of competition. A spokeswoman from the No. 2 burger chain confirmed that the chain has "chicken fries" — which is chicken breast that has bean cut into French fry shapes, battered and fried — chicken nuggets and chicken breast sandwiches, but no tenders.

McDonald's and Wendy's are just the two latest, and largest, chains to get in on chicken tenders. Back in February, Hardee's promoted its existing tenders by providing the option of dressing them in Cajun seasoning as a limited time offer. Then in April, South Philly Cheesesteaks & Fries, a 15-unit subsidiary of Villa Restaurant Group, introduced The Chick Philly — breaded, fried chicken tenders with pickle chips and mayonnaise drizzled with honey and served on a 10-inch roll for around $7.50.

In July, because of a legal complaint from another quick-service chain that may or may not have been Chick-fil-A, South Philly renamed the sandwich The Cease and Desist.

As far as white-meat chicken goes, the tender is a premium product. It's the whole pectoralis minor muscle of a chicken, attached to the main breast — sort of the tenderloin of the chicken. Only two exist per bird, and they're the cut used by 310-unit Raising Cane's Chicken Fingers, often regarded as the best in class when it comes to chicken fingers, and one of the fastest growing chains in foodservice.

Consumer research group NPD doesn't measure consumption of tenders per say, but it says chicken strip consumption, which includes tenders, is on the rise. Some 1.3 billion servings of chicken strips were ordered at restaurants in the year ending August 2017, according to NPD — up 2 percent from the previous year.

Meanwhile, although wing prices are at record highs and are expected to continue rising through Super Bowl weekend, tenders are exhibiting what commodity expert DeWayne Dove calls "typical seasonality." The vice president of purchasing for purchasing cooperative SpenDifference, based in Denver, said breast tenders were as high as $2.28 per pound during the height of grilling season, but they're down to around $1.50 at the moment and are expected to bottom out in the fourth quarter.

With tender prices falling even as consumption is on the rise, we're in the rare situation in which this is a game of chicken that everyone might be able to win.