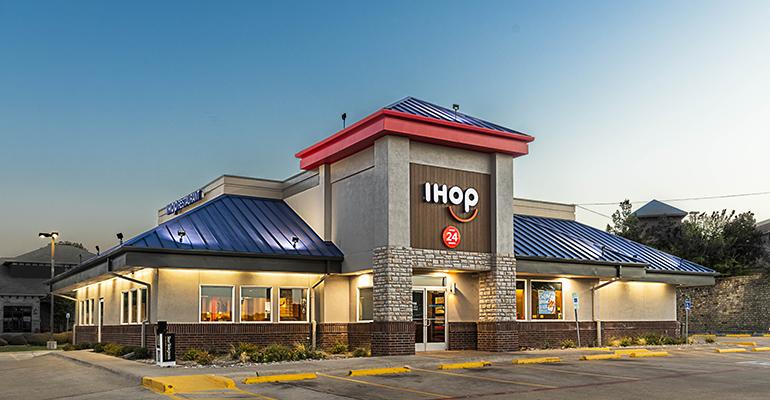 IHOP
IHOP president Jay Johns says the brand is, first and foremost, “a fun brand. We do a lot of fun stuff.”
Menu

IHOP wants your lunch money (and your dinner money, too)

The family dining chain is targeting new diners, new dayparts and taking the brand on the road

Over the past few years, IHOP has been pushing modern marketing and menu items while encouraging lunch and dinner visits. And Wall Street and Main Street have started taking notice.

The brand, which often gets overshadowed by its flashier sister, Applebee’s, is being touted by parent company Dine Brands as the approachable one who takes just the right amount of risks.

“I think we’ve got a lot of momentum going in the brand right now. It’s really based on a few things. Number one at our core is, we’re a fun brand. We do a lot of fun stuff,” said Jay Johns, who has been IHOP’s brand president since June. “I think we’ve kind of reignited that passion for IHOP over the last year or so.” 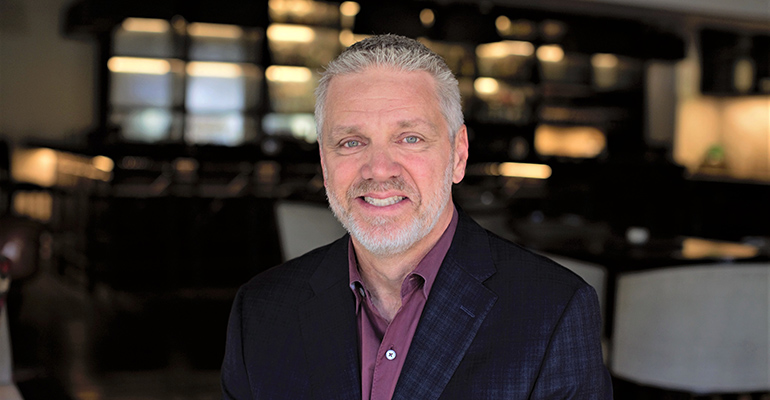 The party started in the summer of 2018 when IHOP became IHOb, at least temporarily, to promote its new steakburger line. The brand embraced the buzz and the confusion — “Did they really change their name?” people asked.

A year later, when the brand released a new line of burgers, they embraced the naysayers or those who said IHOP should stick to pancakes. The menu items were clearly burgers, yet the brand called them pancakes. To be fair, one of the burgers included a pancake between the bun. 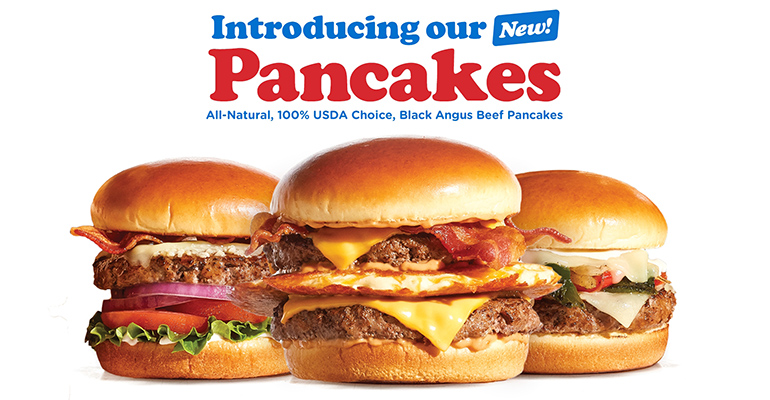 Whatever you call them, the burgers were a splashy way to get customers to think of IHOP outside of breakfast. Attracting customers to the afternoon and evening daypart is one of Johns’ most significant initiatives.

“We are the king of breakfast, but we’ve got restaurants that are open 24 hours in most cases, so we need to have great food and great products and great experience for guests 24/7,” he said.

The brand’s most recently daypart-defying promotion was a chicken and pancake menu, which quickly tripled the amount of chicken its stores sold, said Johns. 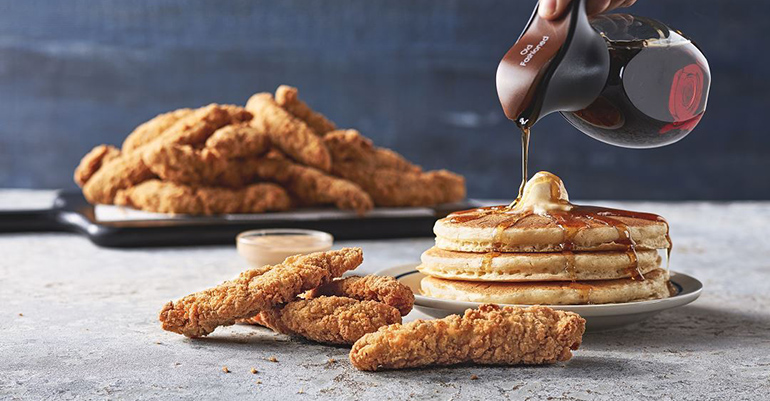 A chicken-and-pancake menu tripled IHOP’s chicken sales, which are still going strong after the promotion ended.

“Even when the campaign ended, we’re still selling double the amount of chicken we were selling before. So it’s been very well received,” Johns said. “I think this is an example of where we’re moving our menu, to having relevant items that are great for lunch, great for dinner. We’ll still have great breakfast any time of day, [but] we want to give guests what they want.” And that’s increasingly lunch and dinner classics like chicken and hamburgers.

Breakfast, though, is where executives believe they can win in catering. Off-premise generally is a focus for the brand and for the whole of the Glendale, Calif.-based company. 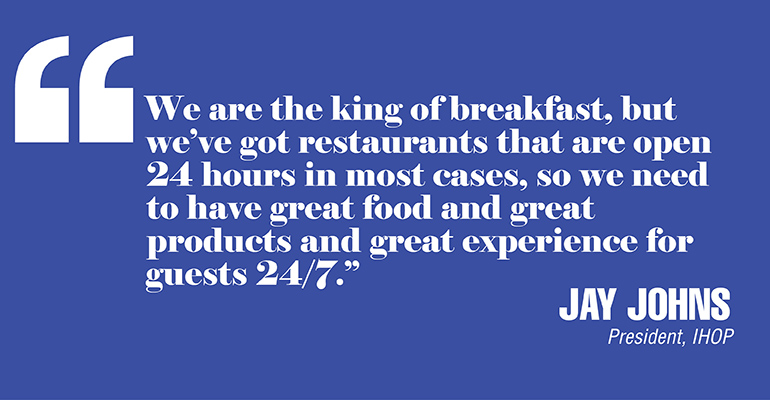 As Dine Brands CEO Steve Joyce sees it, IHOP has a chance to take business breakfast catering from the likes of Panera, a brand dominating the segment.

“Panera is the only one that went after it aggressively, and they’ve built quite a lead,” Joyce said. “We actually think, though, that given the offerings that we have, that most customers would rather have an IHOP breakfast than a Panera breakfast, and we think we have wider menu options for lunches and snacks than you can have at Panera. Obviously, they’ve done well with it, and they’ll continue to do well. We think we have something to offer that’s really interesting.”

“The other one that is equally as interesting to us is family occasions,” he said. “If you’re doing a family brunch after a first communion, or a baptism, maybe some sort of school graduation, and you don’t want to cook, but you want to entertain your family on an extended basis, that’s a great opportunity for IHOP.”

During the latest earnings call, executives noted that off-premise makes up about 9% of sales. The company has an immediate goal to grow to 15% of sales. Off-premise comparable restaurant sales increased by approximately 24% in the third quarter, ended Sept. 30. IHOP also saw its seventh consecutive quarter of overall positive comparable restaurant sales growth last quarter.

That sort of growth is impressive, restaurant analyst Mark Kalinowski said. “IHOP is taking advantage of their breadth of the menu, the brand strength that they have and consumer desire for convenience, and putting that all together.” 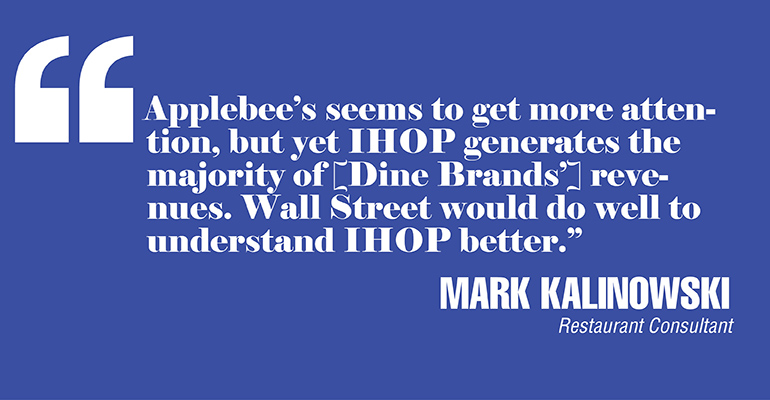 Generally, IHOP should be on Wall Street’s radar, he added.

“Applebee’s seems to get more attention, but yet IHOP generates the majority of this company revenues,” Kalinowski said. “Wall Street would do well to understand IHOP better.”

In late October, IHOP announced the largest multi-unit development deal in its history. The brand plans to develop nearly 100 IHOP restaurants with TravelCenters of America.

Roadtrippers are just the latest demographic IHOP is targeting as the restaurant welcomes everyone. Executives like to note what might be a surprising fact to someone who hasn’t been to an IHOP recently — half of IHOP guests are under 35 years of age. The implicit message here is, “This is not your grandmother’s IHOP.” Although, of course, she’s still welcomed.