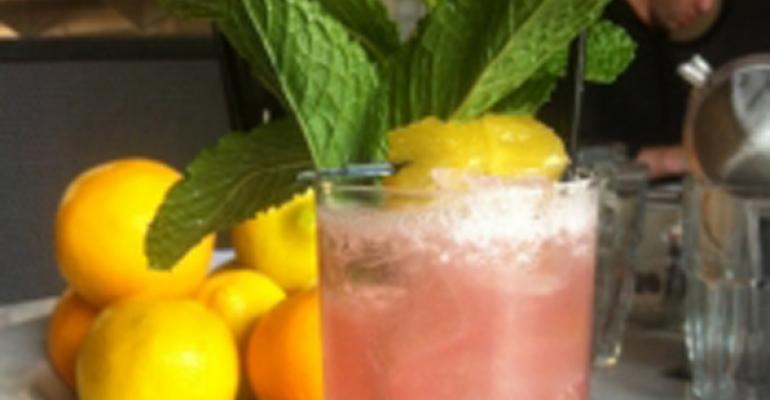 G.e.b. pours serious drinks with a touch of fun

With its tiki-inspired cocktails and daily pitcher of punch, the new casual eatery g.e.b. in Chicago by celebrity chef Graham Elliot proposes that a serious beverage program, like a serious culinary effort, can be unpretentious and fun.

Symbolizing that attitude are signature drinks like the Sarawak Sling, an update of the classic Singapore Sling; Old Tommy Cool-Hands, a revisited Tom Collins; and Black Tai Affair, a summery dark rum libation with orgeat syrup and key lime.

“They are vacationesque drinks,” said Rob Miezio, g.e.b.’s general manager and beverage director. “We want to be that home away from home, that getaway, that forget-about-a-rough-day kind of place. Nothing says that more than sipping something that reminds you of a vacation in the tropics.”

The g.e.b. cocktails, which are priced at $11, avoid tiki clichés like paper umbrellas and coconut shells in favor of new twists on tropical favorites. “We thought about how to take ridiculous, neon-colored spirits like Blue Curaçao, for example, and make drinks that are fresh and legitimate,” Miezio said.

One of the tweaks is using Old Tom gin in slings and collinses. Old Tom is a style of gin, sweeter and richer than dry gin, which was popular in the 19th century and is now in revival by artisanal distillers. It stars in the Sarawak Sling, shaken with fruit juices and served on the rocks with a wedge of smoked pineapple. “In true Graham Elliot fashion, we had to take it to the next level,” Miezio said.

In Old Tommy Cool-Hands, a barrel-aged brand of Old Tom gin, along with lemon and Jamaican bitters, adds nuance. “It picks up that bourbon or whiskey note because it spends time in oak barrels,” said Miezio. “Topping it off with the bitters, which also has a warm, woodsy flavor profile, seems to be a match made in heaven.”

G.e.b., which stands for Graham Elliot Bistro, is the chef’s third Chicago eatery and his first casual-dining concept. He also owns the Michelin-starred fine-dining restaurant Graham Elliot and the fast-casual sandwich shop Grahamwich. Each of those embodies a playful attitude. Décor touches at g.e.b., which has been described as a church of rock ’n’ roll, include an amplifier as host stand, reclaimed church pew banquettes and menus garbed in vintage rock LP album covers. Faux religious candles bear images of notable chefs and musicians like Alinea’s Grant Achatz and the rocker Bono of U2.

Miezio said the bar “loosely adheres” to the principal of keeping cocktails simple. Similarly, the kitchen focuses on straightforward cooking with only three main ingredients per plate, like pork + okra + watermelon, as the menu tersely states.

One of the bar’s big hits so far is a daily pitcher of punch, which pours five glasses and is priced at $40. The recipe typically combines vodka, citrus and pineapple juices with a splash of Italian aperitivo wine or herbal liqueur like yellow chartreuse.

“We really have free range to play around with it,” said Miezio. “It is one of those great rationalizations for us, being able to do our own fun kind of rock ’n’ roll thing.”