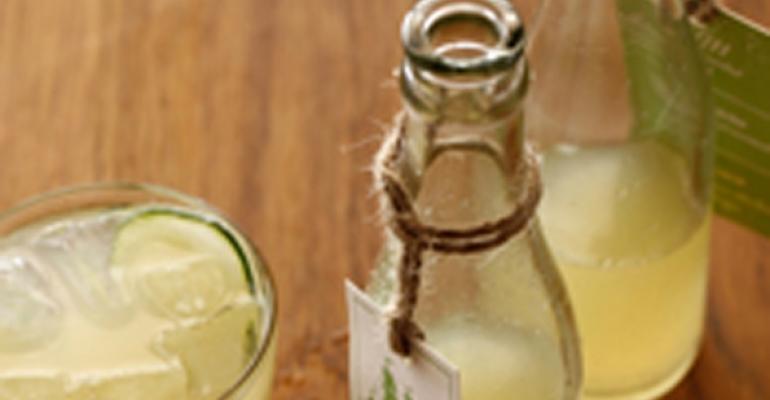 Pairing fountain system hardware with the handiwork of contemporary mixology, Garces Trading Company in Philadelphia wows patrons with a trio of batch-mixed, individually bottled carbonated cocktails, including a libation fit for an Iron Chef.

The most popular is Avenue 1111, a combination of London dry gin, housemade lime cordial, ginger beer and mint, priced at $12. Between 20 and 40 of them sell each night, according to Brandon Thomas, creator of the drinks and beverage manager of the European Café, one of the 15 restaurants in the Philadelphia-based Garces Group, which also operates one food truck and is helmed by Food Network television Iron Chef Jose Garces.

“People love the pop and fizz when the server pops the cap,” Thomas said.

The sparkle comes from professional fountain soft drink equipment rather than the simple, hand-held beverage carbonator and disposable carbon dioxide cartridges that some operators use for bubbly drinks. Thomas said the former gives a stronger, longer lasting, and cheaper fizz than the latter.

“We started by testing at-home carbonators, but we just couldn’t get the carbonation we wanted,” Thomas said. “They are great at home, but when you are batching 40 to 50 cocktails per day, it’s not good enough.”

The heart of his system is a carbon dioxide tank for fountain soft drinks connected to an adjustable pressure regulator. Startup costs were minimal, Thomas said, because the tank came gratis from a soft drink vendor and the gas lasts as long as a year. Thus he saves the cost of disposable cartridges, which can run 35 cents apiece.

Cocktails fizzed by professional equipment have a distinct quality advantage over drinks that are merely topped off with soda, Thomas noted.

“The whole drink is carbonated, so it’s a more perfect drink,” he said. “If you just top off a drink, the soda basically sits at the top and doesn’t do anything. If you shake it or stir it, the carbonation is released and it goes flat.”

Thomas carbonates two- or three-liter cocktail batches every other day. He transfers them into 187-milliliter bottles sealed with a crown cap. They can last four or five days, but typically turn over more quickly than that, he said.

Patrons also enjoy the two other carbonated creations. One is the Pepino Fresco, a refresher of blanco tequila, elderflower liqueur and the juices of fresh celery, cucumber and lemon. Thomas said it was designed for fans of Iron Chef America, the Food Network TV show in which chef-owner Jose Garces stars as an Iron Chef. Garces and celebrity mixologist Tony Abou-Ganim showcased a similar drink in a winning culinary battle against a rival chef and mixologist team on an episode this year.

The other is the Americano, a bracing drink with a backbone of Campari, the Italian bitter aperitif, countered with sweet vermouth and orange oil. This is for “the foodies and industry people” who like bitter flavors, Thomas said. It is a love-it or hate-it drink, but it can grow on you.

“Honestly, I started out as a hater,” Thomas said. “But after developing this drink and drinking more of it, I’m kind of in love with it now.”